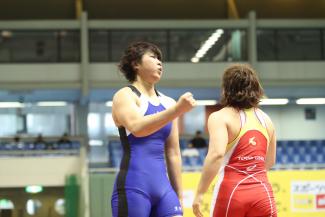 TOKYO (May 30)---After seeing both of her siblings have to settle for second places, Yasuha MATSUYUKI was determined to give the family a champion. After doing that, she proceeded to earn a chance to make a name for herself at this year's World Championships.

Matsuyuki claimed the women's 76kg title at the Meiji Cup All-Japan Invitational Championships on the final day Sunday by beating an injury-slowed Yuka KAGAMI in the final, then repeated the victory in a playoff for the place on Japan's world team.

"I was determined that no matter what, I was going to win the title, then win the playoff and get the spot for the World Championships," said the 21-year-old Matsuyuki, a three-time world junior medalist.

Matsuyuki's 3-1 victory over Kagami in the final avenged a loss to the 2019 world junior and Asian champion at the Emperor's Cup All-Japan Championships last December, thus setting up the showdown for the world team spot.

In the playoff, Matsuyuki scored with a stepout, then on the activity clock on each side of the break as Kagami's movements were limited by an ankle injury suffered five days ago. Late points stopping a desperation throw attempt by Kagami made the final score 5-0.

"Her wrestling style was different than usual," Matsuyuki acknowledged. "I didn't hear anything directly from her, but I thought she must have some kind of injury. She usually goes for tackles, but she didn't try any."

Kagami said she was injured in practice and had considered withdrawing up to the last minute. But with a berth at the World Championships on the line, the 19-year-old thought she might be able to somehow manage. It was harder than she imagined.

"I couldn't attack so I had to come up with a plan to score one or two points," Kagami said. "I knew I was going to draw cautions. I just tried to do what I could."

The two All-Japan tournaments, the Emperor's Cup and Meiji Cup, serve as domestic qualifiers for the team to the World Championships. A playoff was held in weight classes in which the champions were different, as long as they also entered the Meiji Cup. None of the 12 wrestlers who qualified for the Tokyo Olympics took part.

On Day 2 of the four-day tournament held without spectators at Tokyo's Komazawa Gym, Matsuyuki's older brother Taisei advanced to the final at freestyle 86kg, but missed a chance to force a playoff when he lost to Emperor's Cup champion Hayato ISHIGURO -- who will be joined on the flight to Oslo by his older brother Takashi, who won the 97kg title Sunday.

A day later, the Matsuyuki clan suffered another setback with Yasuha's twin sister Naruha lost in the women's 68kg final to Rin MIYAJI, then again to her in the world team playoff.

In a family meeting before her final, Yasuha said, "We said, we can't all finish second. That motivated me to make sure we won at least one title. We still have never all won at the same tournament. That's something we want to do."

Born in Aichi Prefecture in central Japan, the Matsuyuki twins entered their first national tournament while in fifth grade. They are both currently students at collegiate powerhouse Shigakkan University.

How did they decide who would wrestle in which weight class?

"From the time we were little and both entered national tournaments, generally I entered the heavier weight class," Yasuha said. "It just became natural. I was a little heavier, and we didn't have to talk about it."

Naruha, a 2019 world junior champion, was the first of the two to make it to a senior World Championships, placing eighth at 72kg in Budapest in 2018. Yasuha knows she has her work cut out for herself in Oslo. 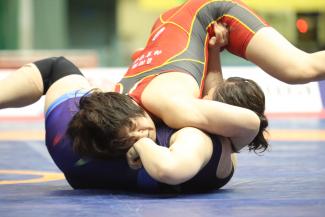 In other action, 2019 world bronze medalist Masako FURUICHI captured the 72kg crown, making her the only one of the six Japanese women medalists from the last World Championships in 2019 to be making the trip to Oslo.

Furuichi followed up her title run at the Emperor's Cup by defeating defending Meiji Cup champion Mei SHINDO 8-0 in the semifinals, then scoring a victory by fall over an overmatched Sumire NIIKURA in the final.

Furuichi flipped Niikura onto her back after a takedown and ended the match in 1:38 to add to the lone Meiji Cup title she won at 69kg in 2016.

Furuichi, the 2019 world U-23 champion, was a member of the Japanese women's team that was suddenly withdrawn from the Asian Championships in April after someone came in contract with a person infected by the coronavirus. No one on the team tested positive themselves.

That was another disappointment for Furuichi, who was less than satisfied with her bronze medal from the Nur-Sultan worlds. She is determined to leave Oslo with a gold, but to do that, she knows that she will likely have to find a way to beat a Chinese opponent. In 2018 and 2019 alone, she was dealt five losses at the hands of a Chinese.

"It will be right after the Olympics, so I can't imagine at all who will participate," Furuichi said. "But I know the Chinese wrestlers are strong and I have a tough time with them. I want to prepare so that I don't lose to them beforehand in my mind." 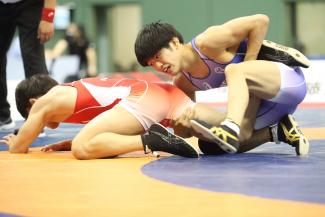 Hasegawa earns world team spot at 61kg
In another world team playoff on Sunday, 2018 world U-23 champion Toshihiro HASEGAWA put on a takedown clinic in rolling to a 10-0 technical fall in 1:32 over Emperor's Cup champion Kodai OGAWA at freestyle 61kg. That avenged a loss to Ogawa in the semifinals of the Emperor's Cup.

An hour or so earlier, Hasegawa won his first Meiji Cup title with a 6-1 victory in the final over Kotaro KIYOOKA. Hasegawa had advanced with a 12-2 technical fall in the semifinals over Kazuya KOYANAGI in a battle of medalists from the 2018 Asian Championships.

"This time, I think I was able to do my style of attacking wrestling," Hasegawa said. "I think I have matches that people enjoy watching, so I made it a point to incorporate it in my style."

Kiyooka had knocked off Ogawa 7-4 in a semifinal thriller with a last-second exposure off a single-leg attack, after he himself had fallen behind by giving up a takedown with :07 left.

Hasegawa has high hopes for his debut at the senior worlds, and beyond that.

"I will go with the aim of winning the title," he said. "If I do well, then I think it put me closer to putting the Paris Olympics in view."

The elder Ishiguro won the 97kg crown with a 7-0 victory in the final over Hibiki ITO to join his brother on the team to Oslo. The Emperor's Cup champion, Naoki AKAGUMA, was not entered, automatically giving Ishiguro the world team spot.

"It's the first time that we won at an All-Japan as brothers," said Ishiguro, a bronze medalist at this year's Asian Championships. "At the Emperor's Cup last year, I lost in the final and only my younger brother won. This time we were able to win together, so I'm really happy."

In Ishiguro's corner was Katsuhiko NAGATA, a Greco-Roman silver medalist at the 2000 Sydney Olympics, through a link with his sponsorship deal with New Japan Pro Wrestling.

Ishiguro still practices at his alma mater Nihon University, but weight trains at the gym owned by Nagata's brother Yuji, a former national champion and is now a professional wrestler. Yuji is under self-quarantine after returning from a tour of the United States, and Katsuhiko filled in for him at Ishiguro's side.

"I've been training with him and he's been watching me since the Asian Championships, so it's very reassuring," Ishiguro said of the Olympic medalist.

On another matter, Ishiguro was asked to comment about his brother's decision to go with a skinhead look for the tournament.

"It seems he did it to fire himself up," he said. "I don't think it was really necessary."

Another bronze medalist at the Asian Championships in Almaty, Satoki MUKAI, also earned a ticket to Oslo when he captured the Greco-Roman 82kg title to complete the All-Japan double.

After a pair of technical fall victories, Mukai defeated  Yoji KAWAMURA 4-0 in the final in a clash of teammates at the Japan Self-Defense Force's Physical Training School.