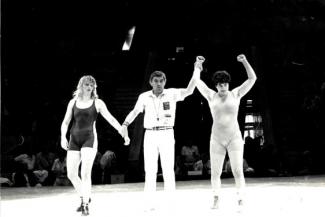 Nikolaou, a European Games silver medalist in 1993, fifth and sixth at the World Cup, has spent the last decade as the National Coach of Greece for Greco Roman and women's wrestling which enhanced the development of women wrestling nationally.

"We are very proud of Evangelia," said United World Wrestling president Nenad Lalovic. "She is the type of female leader we want in our sport. She has dedicated time and effort to develop women’s wrestling in her home country which shows the growth of our sport. We are honored to present her the 2019 Women and Sport Award."

Nikolaou will receive $ 10,000 from United World Wrestling which she will use to expand the development of female wrestling in the Balkan region and support local young girls to balance training and education through financial funding with the UWW prize money.

Nikolaou says “In my mind there was no difference between men and women until I started my sporting career. I encountered many challenges which I managed to overcome with determination and devotion to wrestling. I will continue the development of female wrestling wherever needed and bridge the gap between genders in our sport."

Initiated by Mrs. Natalia Yariguina, UWW Vice President and Chaiwomen of the Women and Sport Commission, the award is intended to promote the development of women's wrestling from the grassroots to the elite level.
Yariguina states “The prize is given to individuals or organizations who made a remarkable contribution to women's wrestling development at all stages and just this year we received a record number of nominations, 11 in total, which shows the success of this program."

Nikolaou says “I want to thank President Lalovic and everyone at United World Wrestling for the great honor in awarding me the 2019 Women and Sport Award. I would like to congratulate them of their acts for the gender equality, this award is a very good reason to motivate more women to step forward and contribute to the development of women wrestling.”

The 2020 applications will be launched in September 2019 with a submission deadline on Feb. 29, 2020. For more information, please contact [email protected]