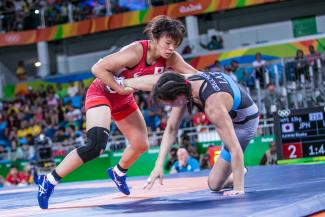 1:20: Guzel MANYUROVA (KAZ) came back to beat Ekaterina BUKINA (RUS) in dramatic fashion to reach the finals at 75kg. Bukina led 8-3 after the opening period and appeared to be on her way to victory. Manyurova turned the tables late and was able to get a fall with eight seconds left on the clock.

1:18: Erica WIEBE (CAN) blanked Vasilisa MARZALIUK (BLR) 3-0 in the semifinals at 75kg. Wiebe scored a takedown in the second period off a single leg.

1:04: World silver medalist Risako KAWAI (JPN) made it look easy in the semifinals at 63kg, rolling to a 10-0 victory over Inna TRAZHUKOVA (RUS).

12:56: World champion Helen MAROULIS (USA) earned a fall in the first period over world No.2 Sofia MATTSSON (SWE) to advance to the gold-medal match at 53kg. Maroulis controlled the match from start to finish. She scored first with a knee pick and led 2-0 after the first period. Another takedown in the second period put her up 4-0. Then in the final minute she scored a takedown and drove Mattsson over for the fall.

12:46: Ekaterina BUKINA (RUS) punched her ticket to the semifinals with a 4-3 over Aline DA SILVA FERREIRA (BRA) at 75kg. Her semifinals opponent: 38-year-old Guzel MANYUROVA (KAZ), a two-time Olympic medalist (one for Russia and one for Kazakhstan).

12:34: World No.3 Vasilisa MARZALIUK (BLR), a three-time world bronze medalist, knocked off three-time world champion Adeline GRAY (USA) 4-1 to reach the semifinals. Gray scored first off the shot clock to go up 1-0. Marzaliuk came back to score a step out and then late takedown for the win. Marzaliuk will now face Erica Wiebe (CAN), who advanced with a 5-2 win.

12:13: Elena PIROZHKOVA (USA), a 2012 world champion, picked up a win over returning world champion Battsetseg SORONZONBOLD (MGL) 3-2. Piozhkova led 1-0 after the first. The Mongolian came back to take the lead in the second with a takedown. The American responded with a takedown of her own to grab the lead and hold on for the victory. She will now face world No.4 Maria MAMASHUK (BLR) in the semifinals.

12:02: World champion Helen MAROULIS (USA) battled back to defeat JONG Myong Suk (PRK) 7-4 to reach the semifinals at 53kg. Jong led 4-1 in the second period before Maroulis turned it up and scored three takedowns in the finals minute to win by three.

11:31: World champion Helen MAROULIS (USA) picked up her second technical fall of the day, blanking ZHONG Xuechun (CHN) 10-0 at 53kg to move on to the quarterfinals.

11:21: Japan suffered its first loss of the Olympic Games in women's wrestling when Aline DA SILVA FERREIRA (BRA) edged Rio WATARI (JPN) 4-3 at 75kg. Watari was leading before the Brazilian used a four-point move to gain the lead and eventually the victory.

11:05: World No.2 Sofia MATTSSON (SWE) picked up a first-period fall over Odunayo Folasade ADEKUOROYE (NGR) to advance to the quarterfinals at 53kg. Mattsson led 8-0 at the time of the fall.

10:38: Elena PIROZHKOVA (USA), a past world champion, moved on to the quarterfinals with a 10-7 win over Taybe YUSEIN (BUL). Yusein led 4-2 in the second period until Pirozhkova locked up a crotch lift and used it to gain eight points and take a commanding lead. The American would hang on to win by three.

10:29: World No.1 Battsetseg SORONZONBOLD (MGL), a two-time world champion, won a hard-fought match on criteria over Blessing OBORUDUDU (NGR) 1-1 at 63kg. The Nigerian scored first off a step out and led much of the match before she was put on the shot clock and was unable to score.

10:28: Three-time world champion Adeline Gray earned a first-period fall over Andrea Carolina OLAYA GUTIERREZ (COL). Gray secured a quick takedown and then used an arm bar to get the fall.

10:19: Hafize SAHIN (TUR) came back to earn a fall over Lais NUNES DE OLIVEIRA (BRA) at 63kg. The Brazilian raced out to 5-0 lead and narly had Sahin pinned. A short time later Sahin threw Nunes de Oliveria to her back and secured the fall.

10:12: Helen MAROULIS (USA), a returning world champion and three-time world medalist, rolled to an easy technical fall in her first match against Yuliia KHAVALDZHY BLAHINYA (UKR) 12-1. She finished the match with a leg lace.

10:04: World No.1 Yulia TKACH (UKR), a 2014 world champion, opened with a win by injury default victory over Danielle LAPPAGE (CAN) at 63kg. Tkach scored a takedown off a go-behind early in the match, and then Lappage suffered an injury and was unable to continue. 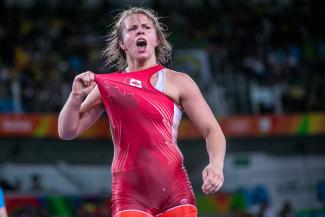 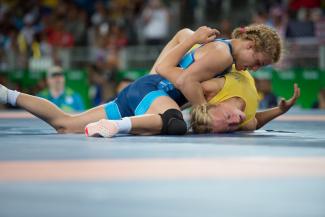 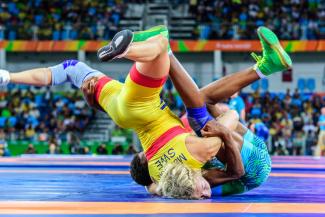 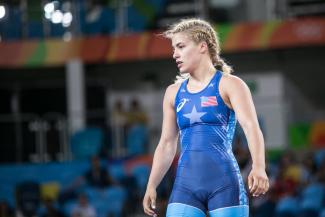