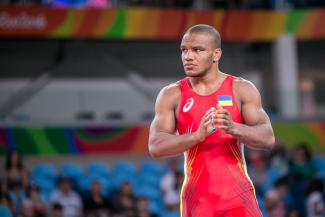 12:33: Mijain LOPEZ NUNEZ (CUB) will wrestle for a chance at a third Olympic gold medal. He defeated two-time junior world champion Sergey SEMENOV (RUS) 3-0 in the semifinals at 130kg. Lopez scored his points off a gut wrench and passivity point. His finals opponent tonight is a familiar one, Riza KAYAALP (TUR).

12:27: Two-time world champion Riza KAYAALP (TUR) dominated Eduard POPP (GER) 8-0 in the semifinals at 130kg. He scored with four gut wrenches to finish the match at 1:53.

12:19: World champion Zhan BELENIUK (UKR) registered a shutout victory over Javid HAMZATAU (BLR) 6-0 to advance to the finals AT 85kg. The match was scoreless after the first period. In the second period Beleniuk scored two points off passivity and then executed a four-point throw.

12:17: Davit CHAKVETADZE (RUS) used a big second period to roll to a 7-1 victory over two-time world medalist Viktor LORINCZ (HUN) in the semifinals at 85kg. After a scoreless first period, Chakvetadze scored a passivity point, and then executed two throws - a four-pointer and two-pointer – to take a commanding lead.

11:47: Two-time world champion Riza KAYAALP (TUR) made quick work of Sabah SHARIATI (AZE) in the quarterfinals, earning a fall in 1:03.

11:41: European Games champion Davit CHAKVETADZE (RUS) continued his impressive run through the bracket at 85kg with an 8-0 technical fall over Denis Maksymilian KUDLA (GER). He used multiple throws on his way to earn the technical fall.

11:29: World champion Zhan BELENIUK (UKR) dominated Nikolay Nikolaev BAYRYAKOV (BUL) 10-1 to punch his ticket to the semifinals. He was aggressive from the start, using a four-point throw to go up 4-0, and then nearly pinned the Bulgarian. Beleniuk ended the match a short time later.

11:13: In a rematch of the Olympic gold-medal match in London, Mijain LOPEZ NUNEZ (CUB) shut out Heiki NABI (EST) 3-0 at 130kg. Lopez, a two-time Olympic champ, scored with a gut wrench in the first period and added a passivity point later in the match.

11:02: Sabah SHARIATI (AZE) advanced to the quarterfinals with an 8-2 win over two-time world fifth-place finisher Robby SMITH (USA) at 130kg. Smith scored first with a two-point arm throw to go up 2-0. Shariati then turned it up, scoring with a takedown and three gut wrench turns to run away with a six-point victory.

10:51: Davit CHAKVETADZE (RUS) knocked off his second straight world bronze medalist by pinning Habibollah Jomeh AKHLAGHI (IRI) at 85kg. Chakvetadze led 3-2 after one, then continued to build on his lead before executing a throw and pinning the Iranian.

10:29: World champion Zhan BELENIUK (UKR) had no trouble with Ahmed Mohamed Ibrahim SAAD (EGY) in the opening round, winning 9-0 at 85kg. Beleniuk scored with a step out and turn in the first period. He added a takedown and gut wrench in the second period to go up 7-0. He then put the match away with a two-point throw.

10:19: No.6 Sergey SEMENOV (RUS), a two-time junior world champion, fell behind early – giving up two gut wrenches, but came back to win 8-4 over No.16 Murat RAMONOV (KGZ) at 130kg. Trailing 4-0, Semenov used a four-point body lock throw to knot the score at 4-4, and then tacked on four more points in the second period to win by four.

10:08: European Games champion David CHAKVETADZE (RUS) avenged a loss from the 2015 World Championships by beating three-time world medalist Saman TAHMASEBI (AZE) 3-0 at 85kg. Chakvetadze scored with a step out and gut wrench to claim the victory. 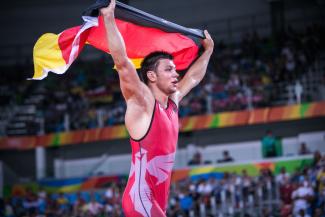