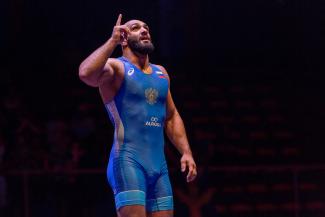 BELGRADE, Serbia (November 2) -- After a memorable first day, the U23 World Championships enter day two with five new Greco-Roman weight classes -- 60kg, 67kg, 72kg, 82kg and 97kg. Iran dominated day one and they will like to continue that on the second day but Russia is right behind them.

That will do for the morning session. Long one but we had some exciting matches and the semifinals are set. We also have the draws of the women's wrestling about now.

1545: A mini upset here! Arvi SAVOLAINEN (FIN) looked good to make the semifinals but he hit a rock named Pavel HLINCHUK (BLR) in the quarters. The Belarusian's top defense and scores give him a 7-3 win

1525: Kamal and Minasyan leave everything on the mat but it's Kamal who wins 2-2 on criteria for his takedown against the Armenian's one and one.

1520: Kamal gets the takedown and the two points. He leads 2-0. Turkey is asking for a point for step out but the referee rules it a push. Turkey challenge the call but lost. 2-1 for Kamal. Minasyan get a point for Kamal's passivity and it's 2-2 but Kamal holds criteria.

1510: Kerem KAMAL (TUR) is up against Tigran MINASYAN (ARM) in the 60kg quarterfinal. A big four to start for Minasyan but Turkey challenge for a leg four. Challenge won. 0-0.

1450: In a turn of events, Jafarov gives no opening and scores eight unanswered points to win 9-2 in the quarterfinals

1440: Big battle between Asian champion Sultan ASSETULY (KAZ) and junior world champion Hasrat JAFAROV (AZE). Assetuly is called passive and Jafarov gets a point. He fails to score from par terre but Azerbaijan challenge. Lost and Kazakhstan lead 1-1 on criteria

1410: Artur SARGSIAN (RUS) continues his quest for a second age-group world title and reaches the quarterfinals at 97kg with an 11-0 win over Nicholas BOYKIN (USA). As usual some big throws in that bout

1350: Sergei KUTUZOV (RUS) gives Iran a taste of their own medicine. He breaks Amir ABDI (IRI) in the 72kg bout and wins 9-1 and advance

We're a few matches away from kicking off the #WrestleBelgrade Day Two quarterfinals. Here are the upcoming matches.

1330: Junior world champion Hasrat JAFAROV (AZE) was tested in the first minute but he overcomes Vasile DOSOFTEI (ROU) 10-1 in the second period

1315: Kerem KAMAL is making his way to the mat for his first bout of the competition. He will face Tommaso BOSI (ITA). He gets a point for Bosi's passivity. Three gut wrenches and he leads 7-0. A huge throw and he wins 11-0

1300: Mehdi MOHSEN NEJAD (IRI) keeps Iran rolling with an 8-0 win over Dylan GREGERSON (USA). No Iran wrestler has suffered a loss on day two so far

1230: Mohammad NAGHOUSI (IRI) and Exauce MUKUBU (NOR) in a battle! Mukubu had the lead but the constant pressure from Naghousi tires him out. A 7-5 win for the Iranian

1200: Artur SARGSIAN (RUS) is making his way to the mat! He faces Ondrej DADAK (CZE) at 97kg. He begins as the aggressor and Dadak is called for passivity. Sargasian hits a big four and a roll to lead 7-0. Dadak goes for a headlock but fails to connect. 4 points for Sargsian and an 11-0 win

1145: World silver medalist Sergei KUTUZOV (RUS) has Denis MERTL (CZE) in the opening round at 72kg. But he doesn't spend too much time on the mat as he wins 8-0 thanks to the gut-wrenches

1130: How far will Tigran MINASYAN (ARM) go in this tournament? He starts with an 8-0 win over Hleb MAKARANKA (BLR)

1100: U23 European champion Anvar ALLAKHIAROV (RUS) has an easy first round as he beats Rayan B HAWSAWI (KSA) 9-0 to advance at 60kg

1050: It was back and forth but Exauce MUKUBU (NOR) prevails 5-3 over Karlo KODRIC (CRO) in the opening round at 82kg

1045: We are done with the repechage bouts. U23 European champion at 82kg Shamil OZHAEV (RUS) takes on Ilias PAGKALIDIS (GRE). Just effortless from Ozhaev as he wins 9-0

1030: Welcome to day two of the U23 World Championships from the Belexpocentar in Belgrade. Greco-Roman action continues with five new weight categories with Iran and Russia battling for the team title.