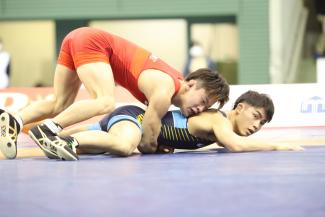 TOKYO (Dec. 19) -- Facing the same opponent that he soundly beat in the final last year and prevented from posting a historic win, Hiromu KATAGIRI was dominant again. There is no mercy, even when that foe is now his teammate at Takushoku University.

Katagiri, the 2019 Asian silver medalist, successfully defended his Greco-Roman 55kg title at the All-Japan Championships by routing freshman Yu SHIOTANI by technical fall in the final for the second year in a row, giving him his third straight title.

Katagiri, a senior at Takushoku whose future in the sport remains undecided, needed just 2:21 to finish off Shiotani 9-0 on the third day of action at Tokyo's Komazawa Gym, on a day when an inordinate number of medalists from the Asian Championships over the past two years fell short of victory.

"He's gotten stronger from last year, but I'm still a bit above him," Katagiri said of Shiotani, who won the national collegiate title in October. "I don't know if he was nervous, but his movement was different in the match than it is in practice. If he fixes that and works hard, he can get a medal at the World Championships."

Last year, Shiotani made the final in a bid to become the first-ever high schooler to win a Greco-Roman title at the All-Japan Championships, also referred to as the Emperor's Cup. But Katagiri wanted no part of that place in history, and stormed to a 12-0 technical fall in just over a minute that he capped with a brash 5-point throw.

"It was my second time to face him, and I'm dejected that I lost in pretty much the same way," Shiotani said. "I thought there was more that I could do. Compared to last year, I feel like I've closed the gap. But I am still missing something and that's why I lost."

Like everyone else, Katagiri's season was disrupted by the coronavirus pandemic, but he found a unique way to maintain his fitness.

"In April, I went back home to Shizuoka [Prefecture]," he said. "No high school in the area has wrestling, so I wasn't able to practice on the mat. I worked out and ran, and as I used to be a judo competitor in junior high school, I went to a local judo club and wrestled with the judo members."

It was during a recent trip home that Katagiri also made a physical change of sorts. His father runs a hair salon, and he got more than a special cut for the Emperor's Cup. "[As a prayer] to win the gold medal, I had the hair in front dyed blonde," he said with a smile, then added, "I didn't have the courage to dye all of it."

While his medal matched his bangs, even Katagiri is unsure whether this marks the end of his career. He will start a full-time job in April with an energy company that is not among the few that specifically hires and sponsors wrestlers.

"I don't know if I will be able to continue wrestling," he said. "If I can't, I want to use what I acquired in my wrestling life as a member of society.

"Typically as a first-year employee, I will be very busy. I don't know if I will be able to practice, or even if I will get time off to go to tournaments. I'll decide [on my future] after I get started on the job."

A Hex on Asian Medalists?

While Katagiri got the job done on Saturday, the same could not be said for a several others who had returned with medals from this year's Asian Championships in New Delhi or the previous one in Xi'an, China. 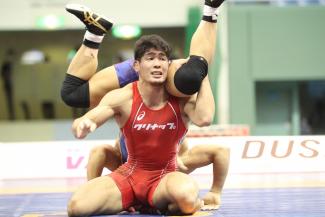 In the freestyle 74kg final, this year's Asian bronze medalist Daichi TAKATANI failed to hold a lead in the final minute and fell 7-3 to Kirin KINOSHITA, a former collegiate star who had lost in his two previous trips to the finals at the Emperor's Cup.

Trailing 3-1, Kinoshita scored a takedown with :42 left to go ahead on last-point criteria, then clinched the win when he countered a back lift for 4 points, denying Takatani a second career national title.

"It had been almost exactly a year since my last match," said Kinoshita, a four-time national collegiate champion from 2015-18 while at Yamanashi Gakuin University. "Last year, I lost in the Olympic qualifying, and I even thought about retiring.

"But the National Games were to be in my home prefecture of Kagoshima, and I was selected [to represent Kagoshima] so I kept going. While maintaining my motivation, I believed in myself and that led to this result." The Games were later canceled, and Kagoshima was picked as host for 2023.

As a measure to prevent the spread of the coronavirus, each weight class was limited to a maxium of eight entries. All but one of the eight wrestlers who have already clinched places at the Tokyo Olympics, including Keisuke OTOGURO at freestyle 74kg, are not entered.

Kinoshita advanced to the final with a 7-2 win over Kojiro SHIGA, an early victim of the Asian hex as the 2019 silver medalist at 70kg.

In his press conference, Kinoshita was asked about his unusual first name, which means "giraffe" in Japanese, although it is written with different characters. He said his parents explained to him that the name came from numerology regarding the number of strokes to write the characters, although he himself admitted he doesn't really understand it.

Asked if he likes "kirin," he quipped, "I like the animal and the beer."

Shinkichi OKUI, who won the freestyle 79kg bronze medal in New Delhi, also tumbled in his opening match, losing to Taro UMEBAYASHI, who would end up finishing third. 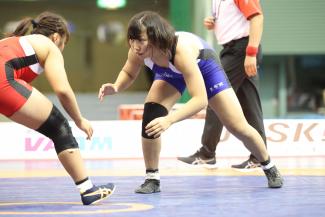 The biggest shock of the day came in the women's 59kg final, in which Akie HANAI scored a takedown in the final :05 for a stunning 3-2 win over 2019 Asian champion and Shigakkan University teammate Yuzuka INAGAKI.

"My teammates who are the same year as me were winning titles and I was always losing," said Hanai, the 2019 world junior champion at 57kg who won her first national senior title. "For me to join them, I'm thrilled."

Inagaki, who already had a senior title to her credit after winning in 2018 as a high schooler, led 2-1, with all of the points scored on the activity clock, when Hanai threw caution to the wind and shot for a single leg, which she finished off for the winning takedown.

"She's a younger member who I always train with, so I know she is strong," Hanai said. "I fell behind because of the passivity points and had to play catch-up. At the end...I wasn't thinking anything, and when I got the points, I thought time had already run out. But when I looked over, I saw the clock was still running. 'Oh, I've won,' I thought."

Naruha MATSUYUKI, the continental silver medalist this year at women's 68kg, defied the trend by capturing the gold in that weight class with a 5-0 victory over Chiaki SEKI.

Matsuyuki, the 2019 world junior champion, scored two takedowns in the second period to clinch the win and add to the previous national title she won in 2017 at 72kg.

The Asian hex did emerge in this weight class as well. Mei SHINDO, the Asian champion at 72kg, dropped down to this division, only to be ousted by Seki, 5-2, in the semifinals.

The other women's title at stake went to world junior and U23 champion Sae NANJO, who defended her 57kg crown by storming to a 10-0 technical fall over Shigakkan teammate Sena NAGAMOTO.

Nanjo got over her toughest hurdle in the semifinals, when she outlasted another Shigakkan member, Hanako SAWA, 8-6.