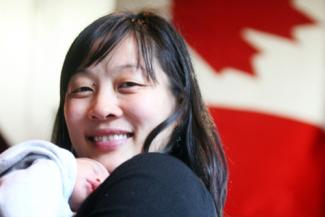 Carol Huynh first became aware of the tempest brewing while on-set for CBC radio’s Canada Reads initiative a little over a year ago.

A twitter message had alerted her to the storm clouds. She didn’t, quite frankly, put much stock in it. Wrestling, as old as the Games themselves, dropped from the Summer Olympic calendar?

Those black clouds began to gather and darken, though, as more detailed reports began to emerge. When at last a producer from the show approached the 2008 Olympic women’s freestyle gold medallist about discussing rumours that had by then become fact, the unthinkable had indeed become reality.

Her heart, Carol Huynh admits, seemed to stop, if only for an instant.

“I was,” she recalled, “in shock. Afterwards I talked to my really good friend Tonya Verbeek and we commiserated on the phone. We thought it was a done deal. We thought wrestling was . . . out.

“So we kind of had a little bit of a cry there. We had no idea what was going on.

“At first I couldn’t believe it. But then it was coming from all these different sources, so then it was ‘Oh my gosh, this is for real.’ I just felt this . . . crumbling feeling.”

Only seven months later, she found herself sitting in a room in Argentina, having helped delivered a second impassioned plea to have her sport reinstated to the Olympic agenda.

Once more, awaiting the verdict, her heart seemed to stop.

“That moment,” she recalled, “was SO nerve-racking. I remember being in that room. It felt like the weight of the world was on my shoulders. There were so many people around the world waiting with bated breath to find out the future of our sport.

“When they announced that wrestling was back in, everybody else around me had jumped up and started screaming and crying. But I had to take a second.

“It was pretty amazing.”

More than the Olympic gold claimed in Beijing, the bronze four years later in London, those Pan Am and Commonwealth Games victories, being voted into the International Wrestling Hall of Fame, that one day in Argentina — a day that ended with such a sense of vindication and relief — will be Carol Huynh’s lasting sporting legacy:

Helping wrestling up off the Olympic mat.

For her part in that decisive initiative, along with a wealth of competitive success, the B.C.-born Huynh joins eight other individuals and two teams in the 2014 class heading into the Alberta Sports Hall of Fame on May 30th in Red Deer.

“Quite a surprise, really heartwarming to find out the people who had nominated me,” she said Monday. “It really means a lot. I’ve lived and trained here in Calgary for half of my athletic career. I’ve been really well supported. It’s just a huge honour.”

Compared to the stress of the effort and emotional equity put into saving Olympic wrestling, facing up to Japan’s Chiharu Icho in the women’s 48-kilogram final in China was mere child’s play.

In an effort to become more TV-viewer friendly and mainstream, a 15-member IOC board voted to axe wrestling starting at the 2020 Games after reviewing a report by its program commission that analyzed 39 criteria, including TV ratings, ticket sales, anti-doping policy and global participation and popularity.

The reaction was swift and volcanic.

“That was a really interesting experience,” said Huynh. “The road started back in February when the IOC announced it was going to kick out wrestling. There was an uproar. The entire wrestling community all over the world was just . . . shocked. Flabbergasted. But people mobilized really, really quickly, including FILA, our international wrestling federation.”

A frantic six-month campaign was waged to reshape the sport, its rules and appeal. A five-person retinue, that included Huynh and fellow Canadian Olympic medallist Daniel Igali, pleaded their case to the IOC. The first stop in convincing the governing body to overturn its decision came in St. Petersburg, Russia. Then the moment of truth in Buenos Aires.

“We spoke from our hearts, our experience with wrestling,” said Huynh. “We had the president of FILA (speaking) to the technical aspects of wrestling and the IOC believed in us again and voted us back in.”

The scare certainly forced her sport to re-evaluate itself in a changing current marketplace.

“I think that was part of the reason why wrestling was voted out — we’d been resting on our laurels. We thought we’d always be there, because we’d been there from the beginning. When you think of the Summer Olympics, even if you’re not a fan of wrestling, you see it there. In the end, I think this whole ordeal was a good thing for wrestling. It gave us a huge kick in the pants and encouraged us to do a lot of things, make a lot of chances, that will help us in the future to be a better sport.”

These days, in retirement, Huynh is giving back to the sport, mentoring aspiring wrestlers.

“I’ve always said you need to have the right support around you in order to to find success. I had so much of that. A big part of that was Leigh Vierling, our women’s national team coach. He’s been absolutely fantastic. He believed me in me and helped me believe in myself. My other coaches. Now it’s great to be in the room athletes who are already on the international level but also athletes in junior high, high school, really just learning the ropes.”

Along with mentoring, Huynh arrived for Monday’s media announcement at Canada Olympic Park with 11-day old Mila, blissfully snoozing away in her baby carrier, in tow.

“Not much,” Huynh laughed when asked how much sleep she’d been getting lately.

“But it’s been great. She’s been awesome. She cries a lot. We know she’s just letting us know when she wants to eat and get changed, all that stuff. She’s just been amazing.

“Definitely a life-changer, that’s for sure.

As she grows up, little Mila is bound realize just how cool her mom is, too. What she’s accomplished for a country and what she meant to a sport that found a champion when it needed one most.

Whenever Olympic wrestling pops up on the TV, she’ll know. There’ll be the medals to play with, a mountain of clippings to pour over, footage to watch and enjoy.

And now, a 45-minute drive up north to Red Deer will help her understand, too.