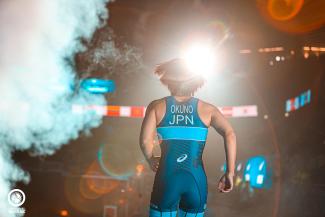 TALLINN, Estonia (August 16) --- Japan jabbed the competition on Thursday night by winning three junior world titles, then threw the knock out punch on Friday night -- closing out the women’s wrestling portion of the Junior World Championships with five additional gold medals. In total, Japan went eight-for-eight in gold-medal bouts and stockpiled medals in all ten weights.

Haruna OKUNO (JPN) kicked off the day for the Japanese women by winning her fifth overall world gold medal.

Okuno said she keeps all of her world title belts at her parent's house. Well, their house gained an additional world championship belt after their daughter claimed her fifth world gold in as many tries. The reigning two-time senior-level world champion added her first junior world title to her long list of accomplishments after expelling Anudari NANDINTSETSEG (MGL), 7-2 in the 53kg gold-medal bout.

By watching Okuno’s four matches, where she outscored her opponents 35-2, you would've never guessed that she was dealing with extreme neck pain on her right side throughout the entire competition. After her finals match, she talked about having to work through her counter-offensive attacks because of her pain, saying “Now I feel neck pain, so I didn’t try to attack. In this tournament, the counterattack was very nice for me.”

In her finals match, the always stoic Okuno shot a low-level attack and picked up the early two-point lead. Her counter offense came into play later in the period when she stopped a Nandintsetseg attack and used a fluid arm-drag to a head outside single leg to pick up four points – improving her lead to 6-0. She surrendered an inactivity point and a stepout in the closing period but was awarded a brutality point after her Mongolian opponent was warned several times for hands-to-the-face. Okuno closed out her run to her first junior world title with a 7-2 victory.

Hanai, last year’s U23 world runner-up, scored four points from two open double legs in the first period and tacked on a four-point double leg and a failed challenge point in the second period to slide past Alina AKOBIIA (UKR), 9-0 for her first career world title.

Inagaki came to Estonia with an unblemished resume, and that's how she’s leaving. She won her second career world title and first since winning the 2017 cadet world title in Athens, Greece, with an 8-2 win over China’s WU Yaru. In the gold-medal bout, Inagaki struck first with a takedown, but gave up a judo-esk whip over and went into the second period trailing 2-2 on criteria. In the second period, the lack of defensive adjustment from Wu allowed Inagaki to pick up back-to-back sweep singles to the left leg of her Chinese opponent. When Wu finally adjusted, Inagaki switched up her tactics and shot a double -- picking up her third takedown of the match to win her second age-group world title, 8-2.

The fourth wrestler to stand atop of the podium while listening to the Japanese national anthem was Miwa MORIKAWA (JPN).

Morikawa, who was wrestling in her third world-title bout, won her first world gold with a hard-fought 2-1 win over 2018 cadet world champion Macey KILTY (USA). The match deciding points came in the second period when Morikawa shot five seconds into the period and drove Kilty out of bounds for the stepout point. Shortly after, the Japanese wrestler snuck behind Kilty, but the American tried to get away, but in the process of doing so, fled the hold and was dinged one point – giving Morikawa the outright lead, 2-1, and ultimately the 65kg gold medal.

The two-time cadet world champion came out on top of the high-entertaining 72kg finals against Evgeniia ZAKHARCHENKO (RUS) with a 10-6 victory. The pair traded blows the entire match, but it was Kagami who trailed 6-4 with 30 seconds left in the second period. The Japanese wrestler jolted to a takedown, then quickly jumped into a pair of leg laces and scored the four-point victory over last year’s junior world runner-up.

Japan closed out the Junior World Championships with the team title. They had 230 points, which was double the amount of points that second-place Russia had. Ukraine rounded out the top-three with 91 points.

The last full day of wrestling kicks off tomorrow morning at 10:30 (local time) and can be followed live on www.unitedworldwrestling.org. 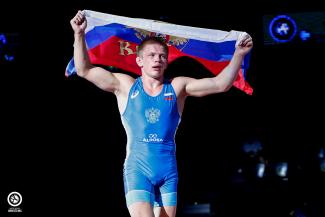 Russia entered the final day of wrestling in Tallinn, Estonia, with the seven-point team lead over Iran, and ended with winning the team title by 37 points. They closed out the Junior World Championships with three additional medals – bringing their overall total to seven junior world medal winners. In total, Russia had four world champs, a pair of silver medalists, and a bronze-medal finisher.

Stepanov, who said the plan coming into the final “was to be first,” collected two points in the first period and one point in the second period and snatched his first world title with a gritty 3-1 victory over Ulvu GANIZADE (AZE). After his win, Stepanov said, “I can’t say (how I feel), I’m just so emotional.”

In the opening period of the finals, Stepanov scored two points from inactivity point and step-out point and carried the 2-0 lead into the closing period. The second period was scoreless until the 65-second mark when Stepanov was thrown down in par terre after being hit for inactivity. He escaped without surrendering a point and managed to tack on a point of his own after a failed leg-foul challenge from the Azerbaijani corner. Stepanov ultimately held on to win, 3-1 -- giving Russia their fourth Greco-Roman gold medal of the tournament, but more importantly, the team title. “Russia is so strong, and I am so happy to become team champions.”

Meanwhile, Kerem Kamal held up three fingers to the crowd, signaling his possession of a third consecutive junior world title after he defeated Sahak HOVHANNISYAN (ARM), 7-2 in the 60kg gold-medal bout. “I’m very happy to win the third gold medal in the junior category. I was before in the cadet finals three times and I lost,” said Kamal.

In his finals match, the Turkish wrestler trailed after the first period, but he expected to be in that position. “The match plan was (to be) safe in the first (period)…Safety first.” The second period was pivotal for Kamal in grasping his third junior world gold. After playing it safe in the first period, Kamal said, “In the second period, I go full power.” And that’s exactly what he did. In the final three minutes, Kamal earned an inactivity point and got to work quickly -- smothering Hovhannisyan with a right-side gut wrench follow by a four-point lift from the right side and commanded the 7-1 lead. He conceded a second-period point but ended up carrying the Turkish flag around the mat at a Junior World Championships for the third consecutive year with a 7-2 victory.

Final Trio of Day Seven Champions
In the 67kg finals, Giorgi SHOTADZE (GEO) and Shant KHACHATRYAN (ARM) exchanged one-point sequences, but it was the Georgian who headed into the second period with the lead on criteria. A stepout 15 seconds into the second period, followed by a four-point throw with 25 seconds left gave the reigning European champion his second world title and first since winning the 2016 Cadet World Championship in Tbilisi, Georgia.

Istvan TAKACS (HUN) stopped Russia from winning their second gold medal of the night with a 7-1 statement win over Aues GONIBOV (RUS) in the 82kg finals. “I came for the gold, and I got it,” Takacs said after the award ceremony.

In the opening period, the Hungarian traded inactivity points with his Russian opponent but wasn’t too worried because it was all a part of his initial game plan. “The plan was to defend the first par terre position, then pick up my points.” He successfully defended the par terre, and when it was his turn, he capitalized on his opportunity -- scoring six points from a pair of two-point lifts and a leg foul.

Takas closed out the Junior World Championships scoring 48 offensive points. When asked about his offensive efficiency, Takas said, “I thought about it before the matches. I wanted to win by one or two points, but in the matches, I felt good and the points just came... Everything clicked.”

At 97kg, it only took 74 seconds for Cuba’s Gabriel ROSILLO KINDELAN to impose his will on Patrick NEUMAIER (GER) and pick up the technical superiority victory. The Cuban suplexed his way to a four-point lead, then stacked on a takedown and a gut wrench -- giving Cuba their first junior Greco-Roman world title since Yasmany LUGO CABRERA’S (CUB) 2009 world title run in Ankara, Turkey.