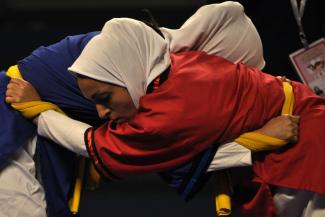 TEHRAN (June 4) -- After recently launching their first-ever women wrestling program, the Iranian Wrestling Federation hosted a national team trial where dozens of women competed with the hopes to represent their country at the 2015 Asian belt wrestling championships.

In March 2015, the Iranian Wrestling Federation announced it will launch its first ever belt wrestling program for women in the country to train and compete in the sport. Now, Iranian women are more ambitious to reach their goals in international levels of wrestling as they passed the first team trial in belt wrestling for 2015 Asian belt wrestling championships.

“It is a great chance to compete in international wrestling events.” Iran woman belt wrestler Akram KHANY said after winning the 65kg title. “When I was a child I liked to be a wrestler but there was nothing about wrestling for Iranian women, so I started judo. Now I have moved to wrestling and I am looking for my dreams in my favorite sport. Winning medal in 2015 Asian Belt Wrestling Championships will be my first goal,” she added.

“I am sure the appearance of Iranian women wrestlers will help to promote women wrestling all over the world, encouraging them to practice wrestling with any religion or cultural belief,” said Khany. 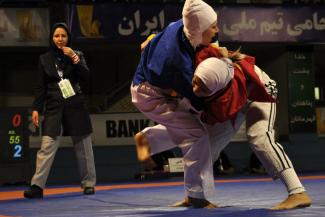 Iranian wrestling federation President Rasoul KHADEM saw the event as the first step to a larger inclusion of Iranian women in the sport of wrestling without losing sight of the important cultural and religious imperatives within Iranian society.

Iran has been making several steps to improving their acceptance of women in the sport of wrestling. Over the past few months Iran has hosted the 2015 Greco-Roman World Cup in Iran and accepted for the first time a female representative of the international federation, United World Wrestling. Mrs. Rodica YAKSI (TUR) attended both days of the event and was joined by Mrs. Kahrangi and several other female dignitaries from Iran.

Last year’s Greco-Roman World Cup was also the site of progress for female wrestling in Iran as USA Wrestling team leader Kiki Kelley became the first woman to walk the mats at the Hafte-Tir Wrestling Hall in Tehran.

The standings of the Iranian women belt wrestling team trial: