TEHRAN (February 15) – The Iranian Wrestling Federation this weekend held the national championship and team selection competition in women’s belt wrestling and grappling. The competition was held in the Wrestling House No.2 at the Azadi Sport Complex in Tehran.

Almost 100 athletes from 23 provinces of Iran attended the belt wrestling portion of the event. The championship featured 24 teams over 7 rounds for a total of 126 matches. Alysh wrestlers of 10 provinces in 6 weight categories earned gold medals, which indicated that the recent development of the style across the country had been successful.

The event was the second national championships for female belt wrestlers in Iran. 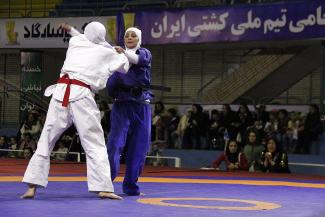 Asian Championship gold medalist Somayeh HEIDARI took the 60 kg title and was chosen as the most technical belt wrestler of the competition.

The Grappling competition featured 65 wrestlers from 17 provinces collected into 18 teams across 6 rounds and 5 weight categories. There were a total of 83 individually competed matches. 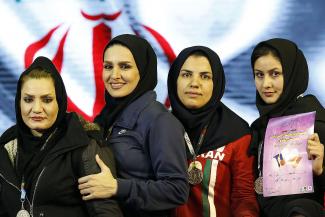 The team title was won by Kermanshah, followed by Lorestan, Isfahan, Tehran, Khorasan Razavi rounding at the top five spot.

Samira HEIDARI of Tehran earned the most technical grappler title at 64 kg.

The competition took place according to the present UWW regulations with supervision of international referees.

The event was held under supervision of Mr. Mohammad Ebrahim Emami the international referee and the chairman of refereeing committee of Iran and Mr. Eisa Momeni president of belt wrestling Asian federation and organizer of this event. Meanwhile, referees participated in refereeing course with Russian instructor Mr. Ilya Zakharov in two parts men and women in grappling style.

The news of competition was broadcast from national TV channels with news and photos of this competition were published in newspapers and websites. Female spectators also attended the competition -- a rarity in Iran – signaling continued progress by the National Olympic Committee and the wrestling federation. 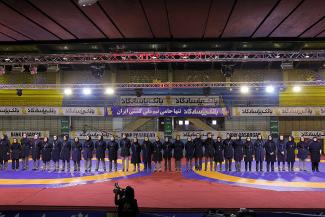 The Iranian Wrestling Federation will also be starting a training camp for these teams to prepare for world competition which includes a plan for a common training camp with well-known foreign countries inside and outside of Iran.