I wasn't as aggressive as I could have been: Snyder after beating Ghasempour 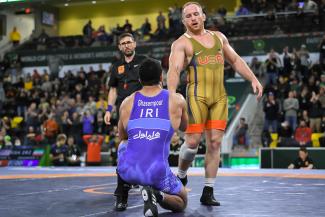 CORALVILLE, Iowa (December 15) -- Kyle SNYDER (USA) has been one of the most dominant wrestlers of his weight class 97kg for more than half a decade now. And barring a couple of wrestlers, few have troubled him since he won his first World Championships at home turf at the 2015 Las Vegas World Championships.

When the World Cup in Iowa presented another opportunity to compete in front of his home crowd, Snyder promptly grabbed the opportunity.

As the leader of the USA team, Snyder led the hosts to a thrilling win over Iran as it captured its 15th World Cup on Sunday with a 6-4 win over its arch-rivals. It was Snyder who won the sixth bout and sealed the deal for Iran.

For the last four years, Iran has bet upon Mohammadhossein MOHAMMADIAN (IRI) as its mainstay at 97kg. But with medalless performances at the Tokyo Olympics and Belgrade World Championships, it is left to ponder on other options.

U23 world champion Amirali AZARPIRA (IRI) was selected for the World Cup and he did well to beat the world silver medalist Batyrbek TSAKULOV (UWW) in the group stages. However, Iran decided to bump the two-time world champion at 92kg Kamran GHASEMPOUR (IRI) at 97kg for the final against the USA.

It did not take Snyder by surprise. He was actually pleased that Ghasempour decided to jump up for the dual and gave fans a contest.

"He [Ghasempour] weighed in at 92kg," Snyder said. "I thought he might wrestle [at 97kg]. Maybe it's better for the dual. It was cool that he came up."

The Rio Olympic champion, however, did not let Ghasempour settle for six minutes. From the first whistle, it was Snyder who dominated the bout, pressured Ghasempour and ultimately won 5-0.

Part of his strategy was to take Ghasempour's game to him and wrestle as hard as possible.

"Just wrestling hard," Snyder said. "I know he [Ghasempour] wrestles hard and I have seen him wrestle. I knew how to be aggressive, take his game to him."

Ghasempour did get to Snyder's legs a few times but failed to convert any of the attacks. With the weight difference and Snyder's heavy wrestling, Ghasempour felt the heat and failed to match the pace of the bout.

Snyder, on the other hand, knew from the beginning that Ghasempour will not be able to withstand the pressure despite Snyder not being as aggressive as he could have been. Snyder said that he liked the bout as it was on his home turf against a good wrestler who stopped him from winning 10-0.

"My number one option is 10-zip but then the number two option is let me be the closer," he said. "I always like to wrestle good wrestlers. I just love to compete and am ready to go. Especially on the home turf, I am always going to be here. [In the bout], I felt I was in good control from the beginning even though I was winning by a point. I wasn't as aggressive as I could have been."

Iran will now have to rethink its strategy of promoting Ghasempour to 97kg. With the 2024 Paris Olympics quotas available at the 2023 World Championships, it will have to quickly find a way to break the drought at 97kg.

Snyder won the World Championships and remained unbeaten at the World Cup but believes that the 97kg weight class will be an interesting one going into Paris Olympics.