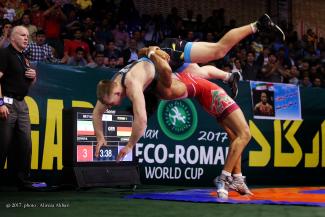 ISTANBUL (November 24) -- In response to current instability in Iran, the 2019 Greco-Roman World Cup, originally slated to be held next weekend in Tehran, has been postponed.

The UWW Executive Committee held a meeting yesterday in Istanbul and assessed a variety of sources including the associated Foreign Ministries recommendations to travellers in Iran and the recent decision of other sports. It was also acknowledged by the Executive Committee that two teams had already withdrawn their participation due to the recommendations of their nations.

"Considering its responsibility towards athletes and teams; and that the situation has not reached a satisfactory degree of stability for the holding of such an international event; and with a concern for avoiding any risk on our athletes, the Executive Committee has decided to postpone the holding of the World Cup GR until further notice," wrote United World Wrestling general secretary Micheal DUSSON, in a letter to concerned national federations.