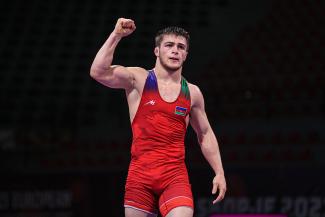 Russia had entered five wrestlers in the semifinals of the five weight classes that were in action on Monday in Skopje. But the hopes of sending all five of them in Tuesday's finals were dashed as Dzhabrail GADZHIEV (AZE) defeated Inalbek SHERIEV (RUS) in the semifinal at the 70kg weight class.

Such was their dominance on the first day of the U23 European Championships in Skopje, North Macedonia the four others which reached the final defeated their opponents either via technical superiority or via fall at the Jane Sandanski Arena.

A former cadet world champion in 2019, Gadzhiev pulled all tricks out of the bag as he hung on for 7-6 win despite being cautioned twice in the bout.

In a bout that saw two cadet world medalists collide, Sheriev opened the scoring with a step out and Gadzhiev leveled it 1-1 after getting a step out of his own. But the big move came when Gadzhiev completed a takedown and continued the action for two turns to lead 7-2.

Then the waiting game began. Sheriev pulled off a slip from Gadzhiev's locks and scored a takedown to make it 7-4 before a warning to the Azerbaijan wrestler gave another point to him.

As Gadzhiev waited for the clock to expire, he was again warned for a singlet pull which reduced his lead to merely a point but he did well to hang on to it for 7-6 win.

Giorgi ELBAKIDZE (GEO) was Gadzhiev's first victim as he lost the 1/8 final 4-2 before the latter humbled Tobias PORTMANN (SUI) 9-2 in the quarterfinal.

But the top performances came in the 57kg weight category as Idrisov ran through the 57kg field. He did not show any mercy to former junior world silver medalist Ramaz TURMANIDZE (GEO) in a 13-2 victory. The semifinal against senior European Championships bronze medalist Kamil KERYMOV (UKR) was as similar story as he won 10-0 to set up a final against Rzazade, who was equally dominant.

After getting a victory by default in the qualification round, he scored a 12-2 win over Hafiz Can HASDEMIR (TUR) and scored three four-point throws against Simone PIRODDU (ITA) in semifinal to win 14-1 in the first period.

The 65kg final will see former junior world champ at 70kg Arushanian take on Kudiev. While Kudiev was sitting in the quarterfinal and had an easier passage to the final, Arushanian was tested by junior European champion Hrachya MARGARYAN (ARM). 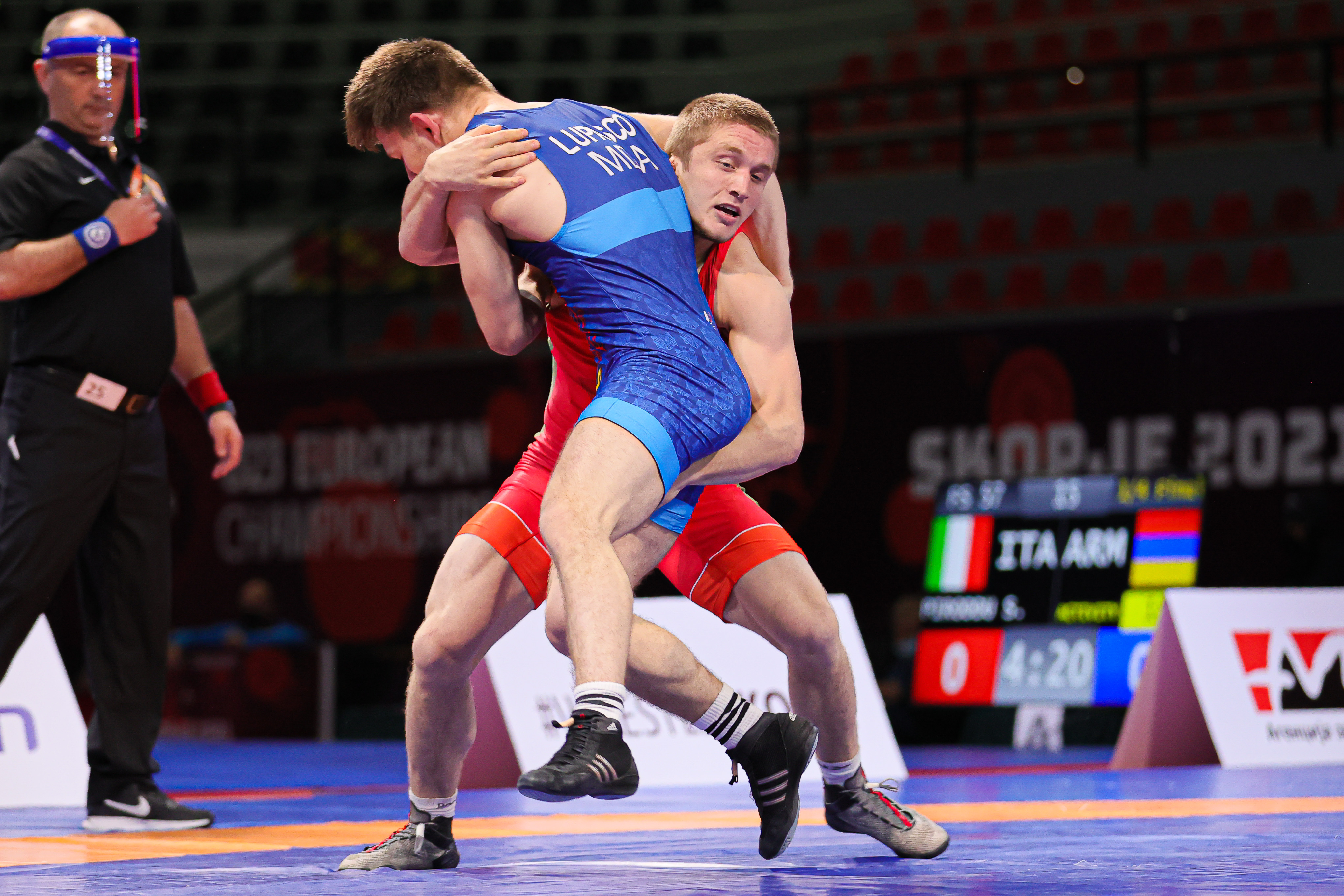 With less than 10 seconds left in the quarterfinal, Arushanian was trailing 4-4 on criteria but got a leg lace and a 6-4 win. Marwane YEZZA (FRA), who seemed to have hurt himself in the semifinal, surrendered against the Ukrainian.

At 79kg, Iakhiev had a to and fro bout against Valentyn BABII (UKR) but managed to get a cradle to pin the Ukrainian. The bout began with Iakhiev exposing Babii on his back to lead 2-0. But Babii got a front headlock for four before Iakhiev's reversal and roll. Babii still led 5-5. He had the Russian on his back but failed to get the pin, going into the break with 7-5 lead.

Iakhiev seemed much aggressive in the second period and began with a takedown before an exposure gave him a 9-7 lead. He managed to get a cradle over Babii and froze him in that position to get the fall with two minutes and six seconds remaining.

He will take on Ramazan SARI (TUR) in the final as he defeated Goga MAMIAURI (GEO) 3-0. No points were scored by action as Sari got a step out before Mamiauri was warned twice.

Joining his Russian teammates in the final is Sotiev. The 97kg wrestler showed extreme composure to win 14-4 against Luka KHUTCHUA (GEO) despite trailing 0-4 at the break. With Khutchua struggling with his cardio in the second period, Sotiev scored a takedown and an exposure in first action.

Seconds later, he managed a perfect leg-lace to finish the bout and set up a final against Lefter who defeated Aliaksei PARKHOMENKA (BLR) 14-7.

Grahmez was the other Moldovian to reach the final as he defeated Arman ANDREASYAN (ARM) 4-3 in the 70kg semifinal. All but one points were scored as a result of step outs.

Freestyle action will continue on Tuesday with 61kg, 74kg, 86kg, 92kg and 125kg wrestler in action in Skopje. 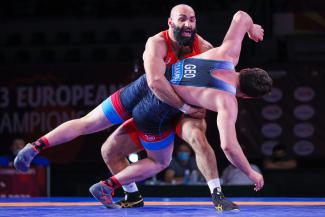 If there was a World Wrestling Day highlight reel to be made, Artur SARGSIAN (RUS) slamming Giorgi KATSANASHVILI (GEO) for four points on Sunday would undoubtedly be part of it.

If Musa EVLOEV (RUS) is the best 97kg wrestler around the world, Sargsian is not far behind. The below video is a sneak peak of his show.

The Russian let out a loud roar as he prepared to lift the Georgian for the second time in their 97kg final. It could be heard around the Sansadski Jane Arena. The roar was not meant to disrespect his opponent but a metaphor of the strength and power he expresses when executing those soul-crushing throws. He was doing this with ease over the last two days at the U23 European Championships in Skopje, North Macedonia.

A quick glance at his wins on Saturday and Sunday show the gulf in class between him and his opponents. His first bout ended 9-0. The quarterfinal was won 8-0. The all-important semifinal was again a 9-0 win.

Katsanashvili was avoiding it in the 97kg final until he was warned for passivity. The par terre position for Sagsian meant his show was about to begin.

Katsanashvili used his skills to remain grounded, assembling all his core strength to convince the referee that Sargsian won't be able to throw him.

12 seconds is what took the Russian to score the first four – a beautiful throw inside the danger zone. He did not loosen his grip, worked some strength and boom. Another four.

After his celebrations, Sargsian embraced his opponent, like he did throughout the competition. 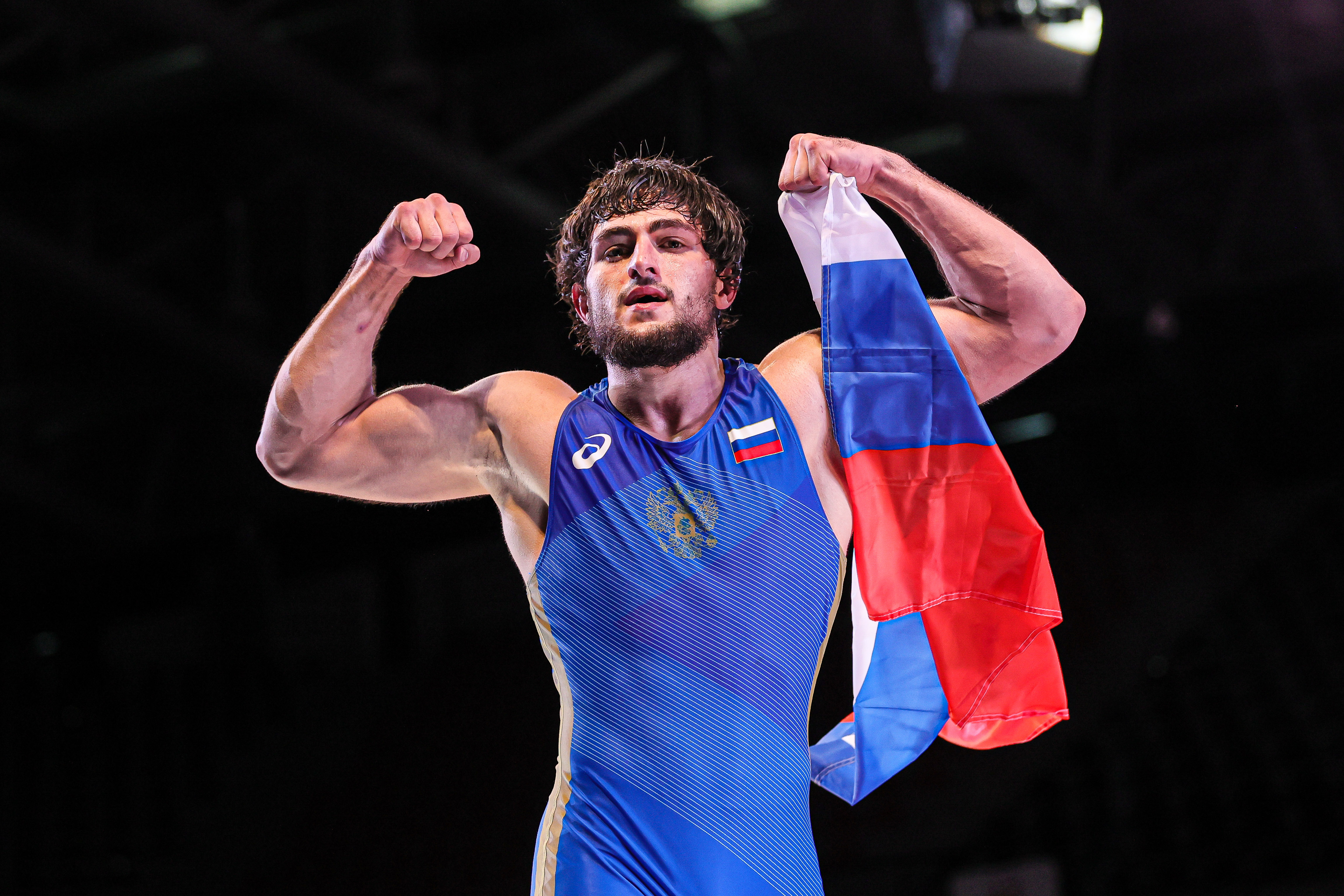 His gold at 97kg was the final of the three Russia won on Sunday. Shamil OZHAEV (RUS) at 82kg and Anvar ALLAKHIAROV (RUS) at 60kg also captured the top medal to propel their country to the team title. Russia had won three gold medals on Saturday as well.

Ozhaev's final against Tamas LEVAI (HUN) went the full six minutes. He got the first point for Levai's inactivity from which Ozhaev scored two points to lead 3-0.

He was also warned for inactivity in the second period but his strong defence meant Levai had to be contend with just the one point. Ozhaev was also happy to stroll to a 3-1 win.

At 60kg, Allakhiarov also had a dominant win against Igor KUROCHKIN (UKR). The opening score was the passivity warning to Kurochkin and Allakhiarov almost got the exposure but a successful challenge from Ukraine reversed his lead to 1-0. He then went for a arm throw and managed to land the Ukrainian in danger to secure four points. He led 5-0 at the break.

Around 25 seconds in the seconds period, Allakhiarov went for a duck under and performed a bodylock throw against Kurochkin who seemed to be on his heels. The four points secured his 9-0 win.

He was the second Ukrainian to finish with a silver medal. Andrii KULIK (UKR) had a fantastic tournament before he ran into Malkhas AMOYAN (ARM) in the 72kg final.

Amoyan is quickly becoming Armenia's top wrestler having risen through the age-group level with junior World and European titles. A silver at the Individual World Cup and senior Euros confirmed his ascend. So at his first U23 event, Amoyan made sure he goes home with gold medal.

Awarded the par terre position after Kulik was passive, Amoyan scored via a gut wrench and led 3-0 at the break. While Greco-Roman generally sees alternative inactivity being called, Amoyan made sure he continues to be the attacking wrestler. As a result, Kulik was again warned for inactivity.

A out-of-bounds throw was enough to give him a 6-0 lead which he maintained as he captured the second gold medal for Armenia in Skopje. 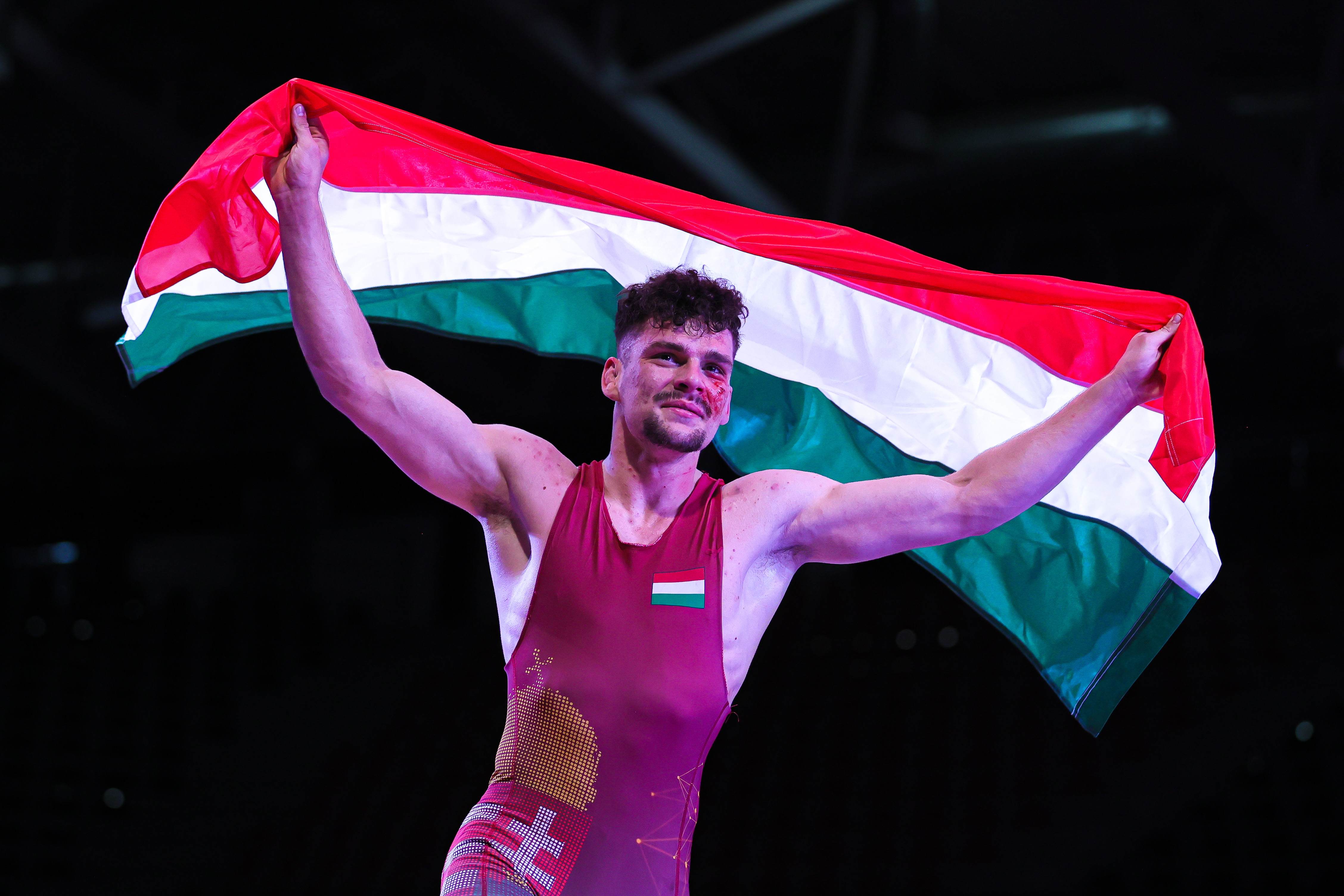 The fifth weight category was 67kg in which Hungary captured the gold medal, thanks to Krisztian VANCZA (HUN). In the final against Kadir KAMAL (TUR), he pulled off a close 2-2 win.

All four points scored in the bout were inactivity and stepout points with Vancza scoring in the second period which gave him the win. 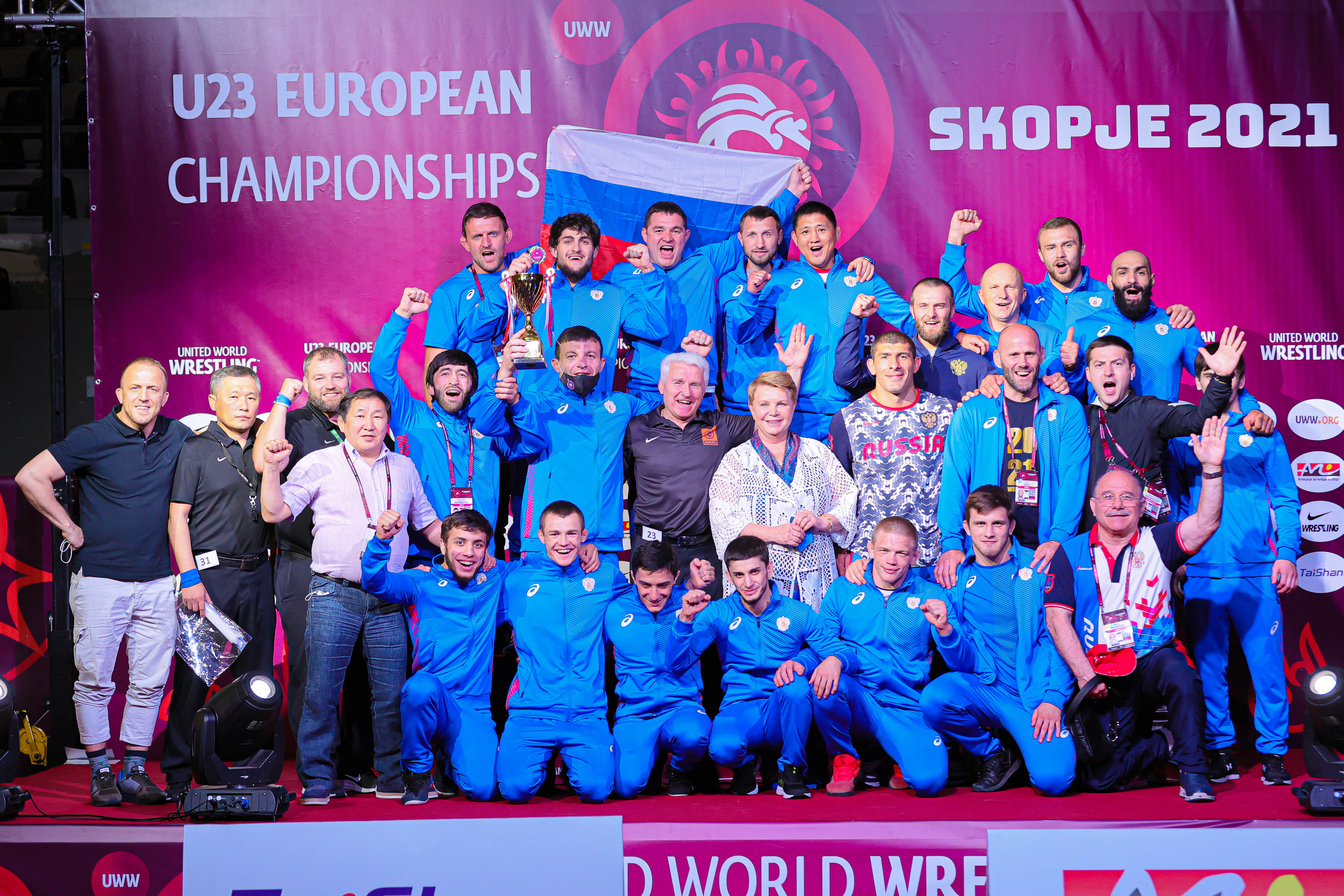