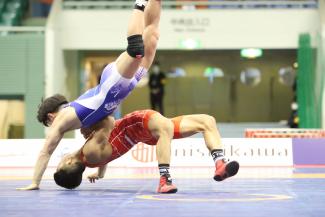 TOKYO (Dec. 20) -- World champion Kenichiro FUMITA is adding new weapons to his arsenal, and while he fired a few blanks in the Greco-Roman 60kg final at the All-Japan Championships, he still managed to capture a third career title and first in two years.

Fumita sent defending champion Ayata SUZUKI sailing a number of times with a newly developed spinning arm throw, but his practice partner kept landing on his feet and he had to settle for a 2-1 victory, with all of the points awarded for passivity.

"Before I even qualified for the Olympics, I wanted to address the issue of coming up with new ways to attack as part of my preparation," Fumita said. "Over this year, I wasn't able to practice like I would have wanted, but as much as I could, I worked on my offensive wrestling."

Fumita was the lone wrestler among the eight who have already qualified for the Tokyo Olympics to take part in the four-day tournament, which wrapped up Sunday after being held under strict pandemic protocols at Tokyo's Komazawa Gym.

He clinched his Olympic spot with a victory at last year's World Championships in Nur-Sultan. The national championships, also referred to as the Emperor's Cup, was his first competition since winning the gold at the Asian Championships in New Delhi in February.

The long layoff made him realize how much he missed live action, which outweighed the risks of an injury or possible wounded pride from losing to a domestic opponent.

"Since the start of the pandemic, it really hit me that I couldn't take for granted that there would be tournaments," Fumita said. "I don't know about the others, but from the time I qualified, that was not everything. My goal is the Tokyo Olympics, but I love wrestling, and I want to wrestle as much as possible.

"Of course, there was getting into shape and getting down to weight, but the main reason is that I definitely want to enter any competition for which I am eligible. From the time I heard that this Emperor's Cup would be held, I was certain I would enter and I started training for it."

As part of the coronavirus countermeasures, entries were limited to a maximum of eight in each weight class. Fumita had just two matches, and advanced to the final with a 12-1 technical fall in the semifinals.

In the final, he caught Suzuki, a student at his alma mater of Nippon Sports Science University where he still trains, with an arm throw several times, injuring his opponent's elbow but being unable to turn the moves into points. In the par terre position, he worked on lifts, instead of his bread-and-butter gut wrenches, and those fell short as well.

"I think I did what I wanted, but it didn't produce points, which gives me something new to work on," Fumita said. "Overall, I think it went well. I'm satisfied that I know clearly when needs to be done."

For 2018 world cadet champion Akari FUJINAMI, her debut on the senior stage could hardly have gone better. 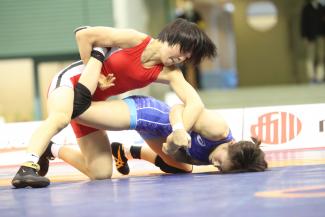 Fujinami, a student at Inabe Gakuin High School in Mie Prefecture, stormed to the gold medal at women's 53kg, taking down such luminaries at two-time former world champion Haruna OKUNO and reigning world silver medalist Nanami IRIE, beating the former by fall and the latter 6-0 in the final.

There is always some trepidation about how a wrestler's success on the cadet level will translate when they get to the big league. But Fujinami, who has been coached by her father since starting the sport at age 4, more than met the challenge. She took a big first step toward an attainable goal of a gold medal at the 2024 Paris Olympics.

"The All-Japan Championships was a stage that I had dreamed of competing on since I was little," said the 17-year-old Fujinami, whose older brother Yuhi was a 2017 world bronze medalist at freestyle 70kg. "I came here with aim of winning, so I am happy."

In her opening match, Fujinami showed no fear in taking the fight to Okuno, who has been battling motivational and self-confidence problems since missing out on the 53kg spot at the Tokyo Olympics to fellow 2018 world champion Mayu MUKAIDA.

A growth spurt of 5 centimeters this year gave the lanky Fujinami a height advantage that she effectively used in a single-leg attack. In a stunning move, she lifted Okuno's leg into the air, applied a half-nelson and slammed her to her back for a 4-point move.

Okuno suffered an apparent left leg injury earlier in the match, and when Fujinami executed a stepover off a single-leg to catch Okuno on her back, Okuno all but gave up for a fall in 3:46.

"When I look back, I had an 'accident'," Okuno said. "But this is a world of competition, and you don't know what is going to happen. The most important thing is to be the winner at the end. So it wasn't a factor."

After blitzing collegian Yumi SHIMONO by 10-0 technical fall in the semifinals, Fujinami scored two takedowns in the first period and one in the second to top Irie, the 2019 world silver medalist at 55kg.

Okuno, who came away empty-handed when she lost 3-1 to Shimono in the repechage round, had beaten Irie in the 53kg final last year, which avenged a loss to her in a playoff for the 55kg spot at the Nur-Sultan worlds.

But Okuno still hasn't come to grips with her failure to make the Tokyo Olympics, and is currently going through some heavy soul-searching.

"A high school teacher once told me that when you are facing two paths, choose the one that is hardest, the one that you least like," Okuno said. "Right now, we will have practice before the end of the year, but I don't want to practice, and I loath seeing the faces of those who won here.

"But I have to face reality, and continue practicing. If I don't get over this tough period, I will never move forward. So I will practice harder than anyone else, and work to get back to my level of wrestling."

Fujinami has not suffered a defeat since June 2017, when she lost in the 44kg final of the national junior high school championships to Umi ITO, the 50kg silver medalist at this Emperor's Cup. She has now won 17 consecutive tournaments, including cadet titles at the Klippan Lady Open three times, and has never failed to win a medal since her first competition as a first-grader.

Not surprisingly, Okuno was impressed. Asked about Fujinami, she replied, "I appeared in the Emperor's Cup for the first time when I was in my first year of high school, and I think she's stronger now than I was as that time. She's good, she has good balance. She has long arms and legs, a body that isn't usual for the lighter weight classes. Anyway, she was strong."

Fujinami had some special help heading into the tournament, as she was allowed to practice at NSSU, where she received tips from retired four-time Olympic champion Kaori ICHO.

"I really like facing strong wrestlers, and this is the first time I have felt this excited and looked forward to a tournament," Fujinami said. "It was fun."

Fujinami was one of three gold medalists from the 2018 World Cadet Championships to strike gold at this Emperor's Cup, joining Nonoka OZAKI (62kg) and Yuka KAGAMI (76kg). 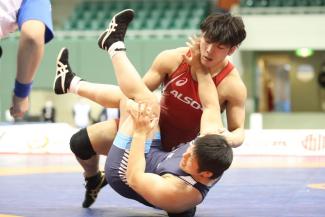 In other action, Sosuke TAKATANI became the third wrestler in Japanese history to win 10 consecutive national titles -- and did it in his fourth weight class. "I don't know the history, but I think I'm the first, so I'm proud," he said.

Takatani, who will represent Japan at the Asian Olympic qualifying tournament in China in March at freestyle 86kg, challenged himself by moving up to 92kg and had surprisingly little trouble in coming away with the gold.

Takatani chalked up a pair of 10-0 technical falls, taking just 1:24 in the final to overwhelm Ryoichi YAMANAKA and cap a dress rehearsal of sorts for when he faces more powerful opponents with an Olympic berth on the line.

"I wanted to test myself on how I could handle bigger, stronger wrestlers at this tournament," Takatani said. "Amid the pandemic, the number of opponents was limited, but it served its purpose."

His 10 titles overall ties him for fifth on the all-time list. Former women's multi-world champion Kyoko HAMAGUCHI holds the record with 16. Icho and Saori YOSHIDA both retired with 13.

Two other wrestlers heading to the Asian Olympic qualifier had mixed results, as Shogo TAKAHASHI, who like Takatani moved up a weight class, captured the Greco 72kg title, while defending freestyle 57kg champion Rei HIGUCHI was upended in his opening match.

Takahashi, Japan's entry at 67kg in China, was equally dominant at the upper weight, scoring a fall in his semifinal match before routing Taishi HORIE by 8-0 technical fall in the final for his third straight title and fourth overall.

The freestyle 57kg class was billed as a potential rematch between Higuchi, the 2016 Rio Olympic silver medalist, and Yuki TAKAHASHI, the 2017 world champion and 2018 bronze medalist. In last year's final, Higuchi came out on top to earn the ticket to the Asian qualifier.

But that never came to fruition, as Takahashi's 5-3 victory for the gold medal came over Yuto TAKESHITA, who had dealt Higuchi a 5-1 loss in the semifinals. For Takahashi, it was his fourth title overall and first in two years.

Higuchi even struggled to come away with a bronze medal, as he barely held on for a 9-8 victory over 2019 Asian bronze medalist Yudai FUJITA.

Higuchi had initially made a run at the Olympics at 65kg, but could not displace former world champion Takuto OTOGURO, who secured his Tokyo ticket by placing fifth at the worlds and then winning the national title.

Higuchi then dropped two weight classes to 57kg, and kept his Olympic dream alive by beating Takahashi. If he fails to secure a spot in China, it is possible that Takahashi will be dispatched to the final world qualifier.

"I had to deal with cutting weight and staying motivated [for this tournament], so this is the level I am at now," Higuchi said. "Along with being glad this wasn't the Asian qualifier, I have to keep in mind my frustration here and, over the next three months, work on the problems that became clear.

"There are many aspects technically and physically that came up that I need to fix. If I don't practice to where it nearly kills me, I can't become an Olympic champion."