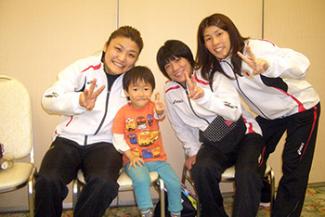 Hitomi Obara’s Olympic journey spanned more than two decades and stretched from the depths of despair to the most exultant heights.

The Olympics are everything to the sport of wrestling. Once every four years, the entire planet pays attention to the world’s oldest sport. Olympic championships hold a mystique unclaimed by any other wrestling event -- fans know it, wrestlers know it. While wrestling does not come to a halt while the spotlight shines elsewhere, and wrestlers earn great and memorable achievements in non-Olympic years, the most brilliant careers are left unfulfilled without the addition of an Olympic medal.

Before 2012, Hitomi Obarra had one of those brilliant but unfulfilled careers. The woman from Hachinohe, Japan, won seven world championships at the FILA Senior-level, the highest level of competition imaginable. This level of success has only been matched by the tiniest handful of wrestlers across all three international wrestling styles. Obara is one of the greatest of all time, but heading into the 2012 London Games, a gaping hole remained in her collection of accomplishments. This brilliant wrestler, who won her first world title at a mere 19 years of age, had never won an Olympic medal. In truth, she had never even made the Japanese Olympic team.

Improbable and unfortunate circumstances seemed to conspire against Obarra’s quest for a spot on Japan’s Olympic team. The bulk of her career took place at the 51 kg weight class, a division where the Olympics do not hold competition. This forced Obarra to switch weights heading into the Olympic qualification for 2004 and 2008. Obara had not desire to move down to 48 kg, the weight below 51 kg, where her sister Makiko was an Olympic hopeful in her own right. Instead, Obara moved up to 55 kg, where Japan also featured Saori Yoshida, widely considered the greatest female wrestle to ever take the mat.

Obara could not surpass Yoshida for a place on Japan’s Olympic team in 2004 and 2008. There failures hit her hard, particularly in 2004 when she contemplated retirement, ballooned up to 80 kg and fell into a dark depression.  Though Obara was one of the very best wrestlers on the planet, it appeared unlikely she would ever represent her country on her sport’s biggest stage.

Luckily, Obara had strong support from those who loved her. After 2004, her family encouraged her to return to shape, and continue following her dreams. In 2010, after the 2008 Olympic team competed in Beijing without her, she married her greatest supporter, Koji Obara. Koji gave her a wedding ring adorned with an Olympic-ring design, and encouraged her to take one last shot at following her Olympic dream. This time Obara would wrestle at 48 kg, a weight left open by the retirement of Makiko.  Obara finally had an unobstructed path to a long sought- after place on the Japanese Olympic team.

At the age of 31, the 2012 London Games represented Obara’s final chance to win her coveted Olympic medal, and she needed to make the most of it. Donning the tiger-emblazoned Team Japan singlet, she looked unbeatable in her first two matches of the Games, dispatching her opponents in short order and qualifying for the gold medal finals.

Even after all her success, and experience, the enormity of wrestling for an Olympic championship still affected her. When asked how she steadied her nerves before the biggest match of her life, she recalls turning to the soothing words of her husband.

""You do not need to think about the result,” Obarra remembered what her husband told her. “Let's do enough to do that you can do now. Even without take a gold medal, nothing changes. People who have fought together are by your side and always will be.”

Secure in knowing that her family would never stop supporting her no matter the outcome, Obara was unflappable in her Gold medal match. Even after dropping the first period to Azerbaijan’s Maria Stadnyk, and standing on the precipice or defeat, Obara never panicked. Calmly and confidently, Obara fought her way back, winning the final two periods, and finally earning her elusive Olympic gold medal.

At the end of Obara’s Olympic journey through more than 20 years of triumph and heartbreak, her thoughts turned to when her golden aspirations originated.

“I was not a strong wrestler in elementary school and junior high school age,” she recalled. “Still, in the yearbook of the elementary school, I wrote, ‘at the age of 21 after 10 years, I want to win to go to the Olympics.’ It was about 10 years later than I had imagined. I got to know through the Olympics, if you keep chasing without giving up, and dream, come true.”

Because Obara never gave up, and never stopped chasing her dream, even when all hope seemed gone, she finally claimed he greatest triumph. With the eyes of the world the seven time world champion won wrestling’s greatest tournament, and placed herself among the sport of wrestling’s true legends.