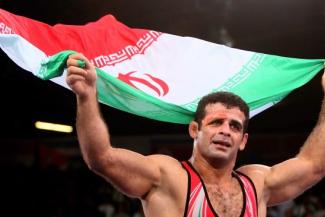 Sometimes the greatest stories are built on second chances.

Iran’s Ghasem Rezaei, the 2012 Olympic Greco-Roman champion at 96 kilograms has overcome crushing setbacks. Some of those losses and setbacks would have hobbld the career of a lesser wrestler, but not Rezai.

Rezaei first success at the international level was 2007 when he won bronze in the FILA Senior World Championships. However, his run at the top of the wrestling world was be short lived. Though he represented Iran in the 2008 Olympics, he suffered early defeat and failed to win a medal. In 2009, Rezaei found himself unable to compete due to injury, and in his absence from the sport, Iran saw other star wrestlers rise to world prominence in the 96 kilogram weight class.

Injured and displaced by a worthy competitor, a second Olympic birth seemed unlikely.

In spite of this gloomy prognosis, Rezaei never lost hope that someday he would win his sport’s highest prize. No matter the setback; whether it was his body failing him, or his rivals winning the championships he sought, he never stopped believing in himself

""I could not get a medal in 2008 Olympics. When I was on way to Iran in plane, I decided to capture a 2012 Olympics medal,” Rezaei once explained when discussing his reaction to defeat in his first Olympic appearance. “Three years before the London Games, me and my friends wrote on a picture '2012 Olympic champion, Ghasem Rezaei'. In those days, I was not even in national team training camp!""

In the years leading up to the 2012 games, Rezaei was unable to recapture his status as Iran’s top Greco-Roman wrestler at 96 kilograms, but says he remained optimistic that his hard work would pay off. Rezaei’s faith in himself was rewarded in 2012 when Rezaei shocked the Iranian wrestling world and won the Olympci berth for his country.

Rezaei grew up in the city of Amol in northern Iran, just on the southern shore of the Caspian Sea. By the time he began training in wrestling, many of his peers had already been participating in freestyle wrestling for some time, and catching up to their skill level was difficult. Buoying Rezai’s development was Saeid Shirzad a respected Iranian wrestler living in Amol chose to open a Greco-Roman school -- Rezaei preferred style.

Rezaei's dedication to Greco-Roman paid off. Upperbody pummeling, throws and lifts suited his physical strengths. He gave himself completely to the sport, and in 2012, at the London Olympic Games, he found himself in the gold medal match. Standing between him and the sport's greatest triumph was Russia's reigning world champion Rustam Totrov.

Though Rezaei faced an opponent with superior credentials, he took the mat unburdened by fear, and un-phased by the pressure of the moment. Rezaei approached his match against Totrov with the same unshakable faith in himself that he showed leading up to the games.

""Fear in competition is meaningless for me,"" Rezaei explained when he discussed his approach to wrestling the best in the world. "" I don’t feel stress against rivals. I believe in myself and put all of my energy on mat.""

This belief and this energy was on full display against Totrov in the finals. Rezaei won the first tightly contested period by virtue of a push out. The second period was a tense affair, with both wrestler unable to find a means to score. To break the tie, the ref ordered both wrestlers into the par terre position. Rezaei resolutely defended Totrov’s desperate attacks, and when time expired the Iranian raised his hands to the heavens in exultation. After all the twists in turns his wrestling career had brought him, he now stood among the chosen few; he now could claim the title of Olympic champion.

After his victory in London, Rezaei would return home to Amol. There the town held a victory parade in his honor-- Rezaei with a wreath around his neck, his adoring fans lining the street, holding his photograph and shouting his name. His victory tour did not just consist of celebration and adulation; he would make more somber stops.

During the 2012 Olympics, the towns of Varzaghan, Ahar and Haris in Northwest Iran were devastated by an earthquake. Rezaei traveled to each of these towns and dedicated his gold medal to their residents. After his crushing defeat in his first Olympic appearance, Rezaei forged a second chance for himself and accomplished his dream. There among the destruction and the rubble, the ruined homes and displaced families, were people that needed hope more than anything else.

Luckily for these people, they had Ghasem Rezaei, the man who never lost hope. He’d never lost faith in his ability and perhaps he could do something even more incredible and lead people to rebuild their lives.