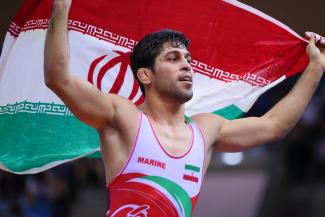 NEW DELHI (May 14) - Having had to settle for silver each of the past two years, Behnam EHSANPOOR (IRI) finally captured that elusive gold medal at the Asian Senior Championships. He could hardly have cut it any closer.

Ehsanpoor scored the winning takedown in the last seconds of a thrilling final at 61kg to defeat KIM Han Song (PRK), 8-6, and kick off a gold rush for Iran to cap the championships at the Indira Gandhi Sports Complex wrestling stadium.

"I worked hard for these championships," Ehsanpoor said. "My goal for the tournament was gold -- and finally I got it."

Iran won three of the four freestyle titles at stake, with Alireza KARIMIMACHIANI (IRI) taking the 86kg gold and Yadollah MOHEBI (IRI) closing the tournament with a victory at 125kg. 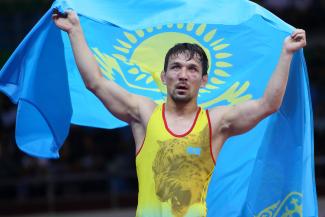 Hamed RASHIDI (IRI), who lost to Navruzov in the quarterfinals, came back to take a bronze medal, giving Iran medals in all eight weight classes.

Iran easily won the freestyle team title with 71 points, followed by Japan with 55 and Uzbekistan with 49. Japan moved up the ranks by winning three bronze medals on Sunday, including one by Rio 2016 silver medalist Rei HIGUCHI (JPN), who rebounded from his shock loss to Kim in the 61kg semifinals.

As Kim booked his place in the final with a late fall over Higuchi, Ehsanpoor took care of some unfinished business by avenging a loss in last year’s final in Bangkok with a 9-4 win over Daulet NIYAZBEKOV (KAZ) in the other semifinal.

That set up a clash in the evening session that had the markings of a classic, and it lived up to the expectations.

Kim looked sharp in building a 6-3 lead before Ehsanpoor cut the gap to one point with a takedown with one minute remaining. As the clocked ticked down, Ehsanpoor again got in on a single-leg and got behind Kim, who stubbornly refused to let a knee or elbow touch the mat.

Ehsanpoor desperately tried to force a knee down as Kim spread his legs wider and wider. With one final surge, Kim’s knee tapped the mat just moments before the buzzer sounded to put the Iranian up 7-6. The DPR Korean corner challenged but was rejected, making the final score 8-6.

"Before the match, we saw all of the opponents and made a plan for him," Iran freestyle coach Ali Akbar DODANGEH said. "But twice he went away from the plan and suddenly lost points. But he returned to the plan and got his single-leg and the takedown. He never expected to lose the match and he didn’t."

In the 70kg final, the 30-year-old Tanatarov built up a big lead, then tired to manage his advantage as he also began to tire under the relentless attack of Navruzov.

Tanaturov, who has had little to show since winning a bronze medal at London 2012, scored with a big 4-point throw early in the second period for a 7-0 lead. Navruzov gained six of the last eight points scored, but ran out of time before he could complete the comeback. 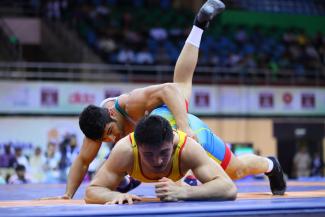 Facing Azamat DAULETBEKOV (KAZ) in the 86kg final, Rio 2016 Olympian Karimimachiani gave up his first point in four matches when he failed to score on the activity clock for the initial point of the match.

But he soon took charge in rolling to a 12-1 technical fall. Karimimachiani finished off the rout at 4:28 when tackled Dauletbekov straight to his back for a 4-point move. 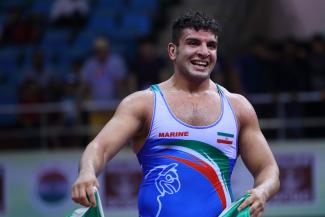 Hometown hopes to end the tournament on a winning note were dashed when Sumit SUMIT (IND) took on Mohebi in the 125kg final as the Iranian proved too powerful in forging a 6-2 victory.

Sumit took an early 2-1 lead when he lifted a single leg and drove Mohebi out for two points. But the Iranian used an effective snapdown for a takedown to regain the lead and added a roll to lead 5-1 after the first period.

Meanwhile, Turkmenistan’s hopes of a first-ever Asian medal fell short when Ashot MASHURYAN (TKM) lost his bronze medal match at 86kg to Umidjon ISMANOV (UZB) by fall at 1:08. Mashuryan became the first from his nation to make the third-place playoff since Nurbeol KHAKIMOV (TKM) finished in fourth place at 130kg at Ulaanbataar 2001.

Japan, which was shut out of the freestyle medals a year ago in Bangkok, finished with five as Momojiro NAKAMURA (70kg) and Taiki YAMAMOTO (125kg) joined Higuchi as bronze medal winners.