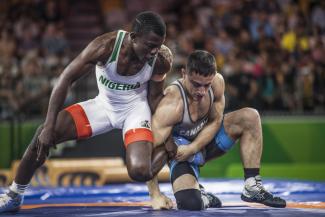 GOLD COAST, Australia (April 17) -- The General Assembly of the Commonwealth Wrestling Committee met last week during the final day of wrestling at the Commonwealth Games in Gold Coast to elect a new board of directors and set out an agenda of growth for the next four years.

Twenty two nations attended the assembly and worked together to create and approve a new organizational constitution. The group also elected the new board of directors, led by Don RYAN (CAN) who is the president of the Canadian Wrestling Federation. Olympic champion wrestler Danial Igali was one of four vice presidents elected.

"I am looking forward to working with our board to move our sport forward and strengthen commonwealth wrestling at all levels," said Ryan. "We want to improve our efforts on behalf of the athletes, coaches and officials, especially given that wrestling has been recently added as a core sport at the Commonwealth Games."

The board also stated that it would be improving outreach and upping its efforts for promotion and the development of wrestling within the Commonwealth.

"As we continue to develop our sport, I have spoken with representatives from United World Wrestling and the CEO of the Commonwealth Games, David Grevemberg, regarding opportunities to strengthen our sport in the commonwealth and the world," said Ryan. "It's a very exciting time for our athletes."

Commonwealth Wrestling Board of Directors, Secretary General and Members: ZAGREB, Croatia (February 8) -- The first Ranking Series event of the season, the Zagreb Open, just wrapped up in the Croatian capital. Wrestlers used the point-based competition to earn points towards their seeds at the five Continental Championships and Belgrade World Championships.

The United States topped the team standings with 174 points, while Iran and Azerbaijan rounded out the top three.

Aliabbas RZAZADE (AZE) won gold at 57kg and helped Azerbaijan close out the competition in the third position. They had seven medalists--one gold, two silver and four bronze medals--and finished with 135 points.

Here are the 10 freestyle finals from Zagreb.