Wrestler of the Year

“Best Wrestler of the Year” Awarded to Taylor, Olli, and Bacsi 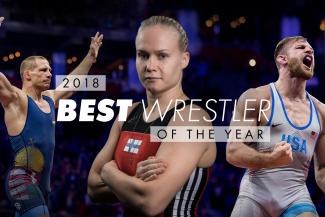 CORSIER-SUR-VEVEY, Switzerland (January 1) – With the 2018 wrestling season officially at a close, United World Wrestling has awarded “Best Wrestler of the Year” honors to David TAYLOR (USA) in freestyle, Petra OLLI (FIN) in women’s wrestling, and Peter BACSI (HUN) in Greco-Roman.

The award was based on the number of ranking points each of the wrestlers attained over the course of the 2018 season. A majority of points were earned at the world and continental championships, with additional points earned at a number of style-specific Ranking Series tournaments around the world.

For their efforts, Taylor, Olli and Bacsi each received a 10,000 CHF prize from United World Wrestling.

“I’m really grateful for the opportunity to compete for the USA and represent the Nittany Lion Wrestling Club,” said Taylor. “I wouldn’t have been able to reach this point without my coaches, training partners, and the treigning lab. I’m honored to be the wrestler of the year and look forward to 2019!

Olli, the 62kg world champion in women’s wrestling finished the season with 110 points. The first-ever Finnish world champion in women’s wrestling, Olli also took gold at the 2018 Senior European championships and the Klippan Ladies Open (Ranking Event), as well as a silver at the Ziolkowski/Pytlasinski/Poland Open (Ranking Event).

"I am very grateful and surprised to get such a great honor of recognition,” said Olli. “Wrestlers of the Year is a recognition means a lot of our team who works with me every day, but also for all of the Finland wrestling family.”

At 35 years old, Bacsi was also this year’s oldest world champion in any wrestling style.

The 2019 United World Wrestling season will start on January 24th at the Ivan Yariguin Grand Prix in Krasnoyarsk, Russia with Ranking Series points up for grabs in freestyle and women’s wrestling. As the year comes to a close, United World Wrestling Medical Commission participated in the International Olympic Committee World Conference on Prevention of Injury & Illness in Sport and made presentations on some of the work of the UWW Medical Commission.

The two-day conference which was held on Sunday and Monday was attended by Dr Shadgan and Dr Molnar. The team put up a presentation on two topics -- Wrestling injuries during the Tokyo 2020 Olympic Games and Referees can prevent injuries in wrestling; an experience from the 2018 Youth Olympic Games.

The two presentations also found a place in the British Journal of Sports Medicine.

At the Tokyo Games, 287 wrestlers participated and only 28 injuries were recorded during 322 bouts, resulting in 9.8 injuries per 100 athletes and 8.7 injuries per 100 bouts. For details, fans can access the full presentation here.

At the two youth events in 2018, 768 junior wrestlers participated in the Youth Olympic Games and Junior World Championships. The injury rate was 4.54 percent and 10.64 percent respectively. Full details of the presentation can be found here.

Dr Shadgan also participated in the International Federation's Medical Commission Chairpersons on November 24. The conference was organized by IOC.

In another step for the safety of the wrestlers, Hungary's Marton Tomin also made a presentation on 'development of wrestling mat materials to achieve better mechanical properties and improve the safety of the athletes.'