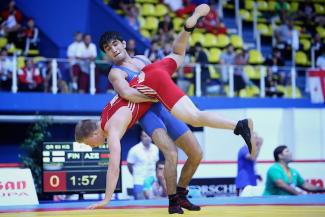 Mukhtarov, a bronze medal winner one year ago in Sofia, maintained a tight defense against 2013 world champion Karen ASLANYAN (ARM) and fashioned a 4-1 decision in the 60kg final on a pair of counter takedowns.

In other finals, Ibrahim NURULLAEV (AZE) opened with a win at 50kg for Azerbaijan and Orkhan NURIEV (AZE) completed the Azeri trifecta with two force-outs to win the 96kg crown.

The fourth gold medal on offer went to European junior bronze medalist Furkhan BAYRAK (TUR) who converted in par terre for two points and then flattened Asia junior champion Payam BOUYERI (IRI) for the fall at 5:58 of the 74kg final.

Even though Aslanyan finished with the silver, Armenia was the only other country to win more than one medal on Tuesday, receiving bronze medals from Slavik GALSTYAN (ARM) at 50kg and Sarkis KOUCHARYAN (ARM) at 74kg.

In all, 12 countries shared in the 16 medals handed out in the first half of the Greco-Roman competition.

In the bronze medal matches Zoltan LEVAI (SVK) roared from behind with six points in the second period for an 8-5 win over Nedyalko PETROV (BUL). Slavik GALSTYAN (ARM) rolled up a 10-2 technical fall at 4:15 over Kanagat AKYLBEK (KAZ) for his second world bronze medal in a row – as a cadet in 2013 and now a junior.

Elman MUKHTAROV (AZE), a bronze medal winner one year ago, maintained a solid defensive position and countered late with a takedown going out of bounds and then a late counter takedown for 4-1 to unseat defending world champion Karen ASLANYAN (ARM).

In the bronze medal matches, European silver medalist Yasin OZAY (FRA) got rolling with a back arching throw in the second period for four points and went on to claim a 14-8 win over Lauri MAHONEN (FIN). Sergey EMELIN (RUS) rode a pair of gut wrenches in the second-period for to a 10-8 win over Mihai MIHUT (ROU).

European bronze medalist Furkhan BAYRAK (TUR) and Asia champion Payam BOUYERI (IRI) traded tilts in par terre with Bayrak enjoying the tie-break advantage. Bouyeri attempted a late front headlock turn and was trapped on his back for the fall.

In the bronze medal finals, Sarkis KOUCHARYAN (ARM) converted with gut wrench in par terre in the first period and held on for a 3-0 win over Hannes WAGNER (GER). European champion Gela BOLKVADZE (GEO) scored with three gut wrenches for a 9-0 technical fall at 2:48 against local favorite Filip SACIC (CRO).

Orkhan NURIEV (AZE), a bronze medalist at 84kg in 2013, scored with a pair of simple force-outs for a 2-0 win over last year’s 10th-place finisher KIM Seung-Jun (KOR).

In the bronze medal bouts, 2013 European junior silver medalist Zsolt TOROK (HUN) scored out-of-bounds twice in a 4-0 win over Africa junior champion Omar Ahmed ABDEL LATIF (EGY). European champion Felix BALDAUF (NOR) got a 4-2 exchange on an arm throw and went on to a 5-3 win over ALIMUJIANG Abdurexiti (CHN).