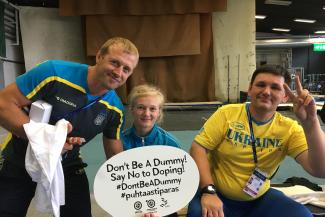 TAMPERE, Finland (August 6) -- The Wrestling Junior World Championships were challenged to join in the national campaign for clean sports. The event gladly took up the challenge, and will take up its symbol, the Golden Baton, from the FIA World Rally Championship in Jyväskylä. The juniors wrestled for world championship medals in Tampere from 1–6 August 2017.

The Golden Baton is part of the Finnish Center for Integrity in Sports FINCIS’s work on behalf of fair play. It has toured international championships in Finland since 2009, laying down a challenge to keep sports fair and clean.

The Golden Baton was passed on to the wrestlers by NN of the World Rally Championship in Jyväskylä.

“This campaign, passing on the challenge for clean sports from one sport to another and from one event to another, is a good demonstration of how important it is for all those involved in sports to work together for a fair game. Having a clean game is not a matter for any one sport. It’s something we must all uphold as a shared value. I encourage athletes to be good role models, and to share their views through social media channels, for example,” says NN.

The Golden Baton was jointly accepted by the chair of the organising committee of the competition Perttu Pesä, and wrestler Jenna Sihtola.

“It’s great to be hosting such a wonderful wrestling championship. I’m particularly pleased that this is the junior world championships. There are many signs that this new generation has grown up in the spirit of fair play and clean sports. We are honoured to carry the baton forward and spread the message it symbolises,” says Pesä.

The organisers of the event, United World Wrestling, and the Finnish Center for Integrity in Sports FINCIS will all be actively promoting clean sports at their information stand, which will be open in the warm-up area from 3–4 August between the hours of 11:00–13:00 and 18:00–20:00. Athletes are invited to participate in the education programme of the World Anti-Doping Agency, and to test their knowledge of clean sports. Participants will receive shirts with the slogan Don’t Be A Dummy! Say No to Doping! 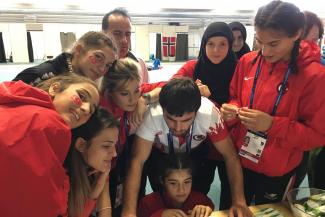