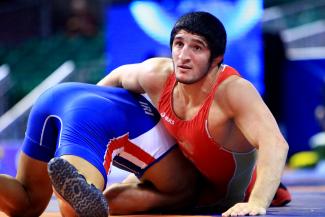 A third world champion from the 2014 world meet, Haji ALIEV (AZE), also repeated at 61kg to finish the season as the top-ranked featherweight. Aliev slumped to No.13 in the 65kg rankings earlier in the year after mixed results in the heavier weight category.

Two more wrestlers also lived up to their No.1 rankings as Jordan BURROUGHS (USA) wrapped up his third world title at 74kg after slipping to a bronze medal a year ago while Magomedrasul GAZIMAGOMEDOV (RUS) made his first trip to the world championships golden at 70kg. 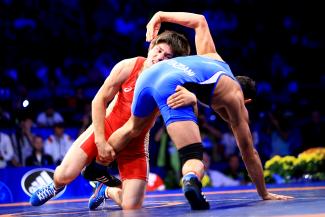 Two silver medalists from the world meet in Tashkent, Sayed Ahmad MOHAMMADI (IRI) at 65kg and Khetag GAZUMOV (AZE) at 97kg, climbed to the top of their respective weight categories over the summer but had to settle for bronze medals in Las Vegas.

Kyle SNYDER (USA) edged defending champion Abdusalam GADISOV (RUS) on criteria in the 97kg final to make the biggest leap to No.1. Synder broke into the rankings at No.15 in August following his triumph at the Pan American Games.

Along with Navruzov and Purevjav, a total of five unranked wrestlers qualified their countries for the Rio 2016 Olympic Games by advancing to the bronze medal finals in freestyle. 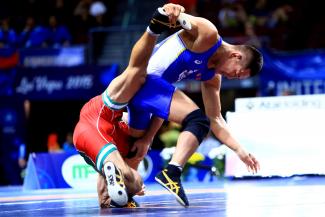 Former world champion Michail GANEV (BUL) and European under-23 runner-up Magomedhadshi KHATIEV (AZE) at 86kg as well as JARGALSAIKHAN Chuluunbat (MGL) at 125kg waded through repechage for fifth-place finishes – and a room at the Rio 2016 athletes’ village.

The top six wrestlers in each weight category at the world championships were automatically awarded the top six positions in this month’s rankings. The rankings No.7 to No.20 were determined, in part, by a wrestler’s performance in Las Vegas along with results in competition throughout 2015.

57kg – Vladimir KHINCHEGASHVILI (GEO) won his first senior-level world title to overcome a disqualification at the European Games in June and claim the No.1 ranking ahead of former world champions Hassan RAHIMI (IRI) and Viktor LEBEDEV (RUS).

65kg – Frank CHAMIZO (ITA) pinned top-ranked Sayed Ahmad MOHAMMADI (IRI) in the semifinals and pulled out a 4-3 win over surprising Ikhtiyor NAVRUZOV (UZB) in the championship final to emerge as Italy’s first-ever freestyle world champion and claim the No.1 ranking.

Navruzov, held off the medals podium since receiving a bronze medal at the the Incheon 2014 Asian Games, outscored four opponents 33-5 through the semifinals where he pinned defending world champion Soslan RAMONOV (RUS) on his way to a silver medal and No.2 in the rankings.

74kg – European Games gold medalist Aniuar GEDUEV (RUS) holds eventual champion Jordan BURROUGHS (USA) to a 4-3 decision in the semifinals to earn No.2 in the rankings over world silver medalist PUREVJAV Unurbat (MGL), who lost by technical fall in the finals.

86kg – Former world champion Ibragim ALDATOV (UKR), 31, outscored three opponents, 34-2, in three bouts before falling to Asia champion Alireza KARIMIMACHIANI (IRI) in the semifinals. Aldatov earned a seventh place in first appearance at the world meet since winning it all in 2013.

97kg – Pavlo OLEYNIK (UKR) rebounded from a loss to eventual champion Kyle SNYDER (USA) with three straight wins in repechage to book his ticket to Rio 2016 with a bronze medal and a No.4 in the rankings.