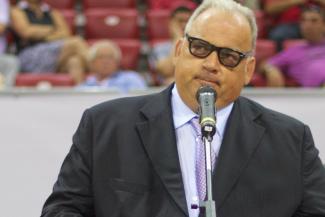 The Serbian leader was ranked No.9, alongside other distinguished names in international sport that have pushed the advancement of sports on a global level. Lalovic moved up eleven places from last year’s ranking.

President Bach of the International Olympic Committee was one of the innovators of the year in part for his well-received Agenda 2020 announcement and a variety of other constructive changes that will see the Olympic Games improve in the years to come.

Lalovic, who took over as president of the international federation for wrestling in February 2013, led last year’s successful campaign to return Wrestling to the Olympic Games.

In 2014 Lalovic built on that success and made good on a series of promises to reform the federation. Primary among Lalovic’s achievements was re-branding the international federation’s name “FILA” to “United World Wrestling” – a move applauded by many in the international sports community.

Lalovic also oversaw the reform of internal governance, enacted rules to promote gender equity, improved rules of competition and oversaw the creation of a Marketing and Communications department.

Wrestling’s governing body recognized the leader’s achievements in September electing him to a six-year term as president of United World Wrestling.