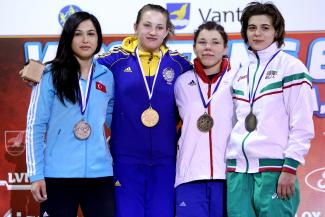 The Super 8 is the international federation’s two-month campaign to raise awareness for women’s wrestling and grow female participation at all levels of the sport.

Eight women, including three Olympic champions, will headline the campaign with personal messages about their time in the sport and ways they hope to grow the sport in the future.

The schedule of events for the IOC Museum will include a panel discussion, World Cup draws and a wrestling demonstration. The panel discussion will touch on issues important to women and sport and be headlined by three key figures in international sport and wrestling:

Fans interested in submitting questions of the panelists are asked to send them via Twitter using the hashtag #Super8 – the official hashtag of the campaign.

Please find below the schedule of events at the Olympic Museum:

12:00 - Lunch with the Commissions at the Olympic Museum
14:00 - Draw for the World Cups (Women’s Wrestling, Freestyle Men, Greco-Roman)
15:00 – Panel Discussion on Women and Sport
16:00 - Wrestling demonstration and refreshments