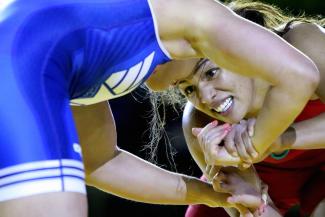 CORSIER-SUR-VEVEY (December 22) – Japan’s Saori YOSHIDA and Kaori ICHO kept rewriting the record books in 2014, but it was the female wrestlers of South America who made the largest strides in 2014.

Led by Aline da Silva FERREIRA -- the first Brazilian wrestler to ever earn a medal at the world championship when she took silver this year at 75kg in Taskent -- South American women impressed on the mats.

In addition to Ferreira's tournament, the women of Ecuador found three titles at the Pan-American championships, a tournament typically dominated by women from the United States and Canada. Angelica BUSTOS (53kg), Luisa VALVERDE (55kg) and Lissette ANTES (58kg) all made their way to the finals and captured gold to make it three straight for Ecuador. The trio's titles combined to make the single best wrestling performance in the history of Ecuadorian wrestling.

In addition to the medal collection of new champions, two-time Olympic bronze medalist Jackeline RENTERIA CASTILLO (COL) was ranked No.2 in the world for much of the year and won five tournaments on the season.

Wrestlers from Peru, Argentina and Venezuela also earned championships in 2014 – a year that could prove pivotal in the development of the continent’s female wrestlers prior to the 2016 Olympic Games in Rio de Janeiro. 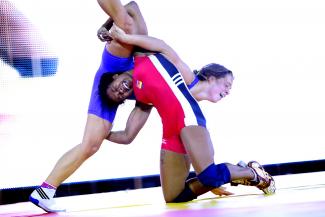