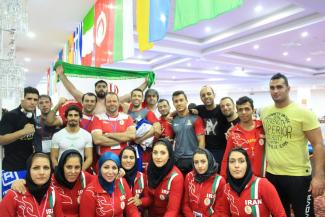 CORSIER-SUR-VEVEY (October 28) – The Iranian Wrestling Federation earlier this month sent more than a dozen female athletes to the 2015 Grappling World Championships in Antalya, Turkey. The women became the first from Iran to ever compete at the Grappling World championships.

The women’s involvement comes on the heels of the federation’s inclusion of more female athletes at the Asian Belt Wrestling Championships this summer in Iran.

Prior to making the trip to Turkey, the Iranian women’s grappling team enjoyed a pair of 12-day training camp. Although Iranian women team had less experience they were able to enjoy their experience. 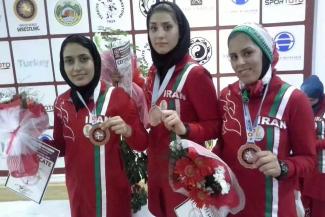 “I am honored to participate in the world championship as a member of the Iranian national team,” said 64kg Gi silver medalist Meymanat Ghasem ABADI. “I had very good opponents and they could defeated me due my inexperience, but I am so happy that I had this chance to participate.

The women competed in the traditional hijab and according to Abadi all athletes, officials and organizers respected the cultural and religious beliefs of the Iranian women. The uniform was also seen as an important step forward and forward motivation for other Islamic women and they will try hard to participate in wrestling competition.

“All of our styles – Olympic wrestling, grappling, belt wrestling, beach wrestling – all of them are intended to bring people together,” said United World Wrestling president Nenad Lalovic. “The Iranian Wrestling Federation has worked very hard to improve the participation of their women and we recognize and applaud that effort.”

Stay tuned to UnitedWorldWrestling.org for more news about the development of women’s wrestling styles in Iran and around the world.